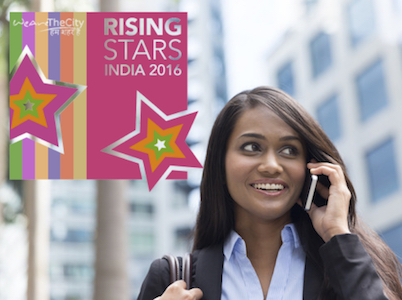 WeAreTheCity India recently announced that it is launching a new Awards Recognition Programme to highlight the achievements of the female talent pipeline across India. Nominations open on 01 August 2016.

50 women in non-managerial positions from a range of industries will be chosen as a Rising Stars in recognition of their achievements.

Vanessa Vallely, Founder and CEO of WeAreTheCity, said: “I am delighted to bring our Rising Star awards to India. I have watched WeAreTheCity India grow over the last two years under the direction of local, professional women and have met some truly talented and inspirational women. I hope that by raising the profile of our members and other women across India that we are able to highlight just how important the female talent pipeline is to Indian businesses and the Indian economy as a whole.”

Jo Gaglani, Chair of WeAreTheCity India said: “WeAreTheCity India has come a long way since its launch in 2013. We have had some unique events for our members supported by our sponsors and have grown organically. The Rising Star awards is a natural next step for WeAreTheCity India to highlight and celebrate upcoming female talent across India.”

Sponsored by Barclays, the Rising Stars nomination process will open on 01 August 2016.

The top 50 Rising Stars will be announced late October and all winners, sponsors and supporters will be invited to attend a prestigious evening reception at the start of November in Mumbai to celebrate and collect their awards.

“We are delighted to be the lead sponsor of the Rising Star Awards which recognises the achievements of talented women on their way to the top; the contributions they make to their organisations and society in general.” Mark McLane, Managing Director, Head of Global Diversity and Inclusion at Barclays PLC

WeAreTheCity launched Rising Stars in the UK in 2015 and since then has recognised the achievements of 150 women. The first awards in 2015 awarded 50 women from 10 different industries as Rising Stars. In 2016, due to the success of the 2015 awards, Rising Stars was expanded to recognise 100 women from 20 industry sectors.

The social media interest in Rising Stars for the 2016 awards has been phenomenal:

To see profiles and images of our 2016 Rising Star Awards, click here.