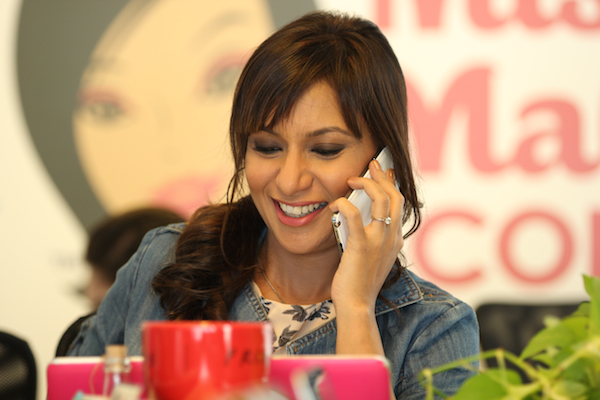 All aboard the MissMalini Express! Next Stop? The Moon!

MissMalini.com shares the latest on movies, celebs, fashion, lifestyle, and anything that is hot in India. Think Perez Hilton meets TMZ meets ENews with a desi twist, finished off with a sprinkling of trademark MissMalini good juju. What do I mean? The celebrity world is often plagued with backstabbing and negativity. MissMalini keeps it clean and positive. Meet her and you will immediately see why followers flock to her.

Determined, independent, effervescent, and passionate about what she does, Malini’s personality radiates happiness. But don’t take her exhilaration for being lax in her business sense.  In just six years, what started as a hobby has transformed into a growing empire, with queen Malini on the throne.

So where did it all begin?

Malini grew up travelling the world with her Indian Diplomat parents. She lived everywhere from India to Somalia, Lebanon, Greece, Germany to Ivory Coast and back. Returning to the homeland at the age of 17, Malini studied professional dancing and English Literature in college. After a few years in Delhi, dancing and freelancing, she packed two suitcases and shipped herself out to buzzing Bombay. What awaited her were six roommates squeezed into a tiny apartment, and a pigeon!

Not to be left behind in the booming dot.com world, Malini smartly became a content writer for MTVIndia.com. But her passion for live media led her to start her eight year-long career as a Radio Jockey! Simultaneously she joined Channel [v] as their digital content head and started MissMalini.com as a hobby blog back in 2008. By 2011 it was blowing up so she quit everything else and became a full-time blogger. Fast-forward to present day, and Malini is living her dream!

Malini even takes on potential adversity with enthusiasm and positivity. When asked if she faced challenges by being a female pioneer she said, “I actually felt being a woman in media was a bit of an advantage for me. Since my job was primarily creating content and being creative talent I got the sense that people felt I had a knack for it and I was also able to charm my way around many roadblocks! I think that in this day and age (yes, even in India) people respect talent no matter your age, origin or gender. I personally have never faced any gender discrimination of any kind. (Perhaps the chauvinists were napping on my watch.)”

Being a woman with so much ambition though can get tough. Malini just needs more hours in the day. “I guess the biggest challenge has been finding the time to do everything I want to do. I still have so many things I want to achieve, and so many ways in which I can see this ‘empire’ grow and of course write that book! But there are just not enough hours in the day!” says Malini jovially.

I feel like my greatest achievement has been creating the ‘brand’ MissMalini. What started as a hobby blog has its own TV show today!

A recent addition to the MissMalini empire is the launch of a first-of-its-kind, Indian reality entertainment television show – MissMalini’s World. This sure-to-be-a-hit reality show premiered Friday, September 5, 2014 on TLC India. Malini gives viewers a sneak peak behind-the-scenes into her glamorous life and the team behind her at MissMalini.com. The show features Bollywood glitterati, movie premieres, celebrity interviews, fashion weeks, office gossip, and everything in-between that has catapulted MissMalini into one of India’s leading digital influencers and an aspirational brand for millions of followers across the globe. (Catch MissMalini’s World every Friday on TLC India at 7:30pm IST – http://www.missmalini.com/2014/09/05/missmalinis-world-launches-tonight-on-tlc-india-mmworld/

As unpretentious as ever, when asked about her greatest achievement, Malini quietly acknowledges her hard work, but shifts her attention to cheering on her followers. “I feel like my greatest achievement has been creating the ‘brand’ MissMalini. What started as a hobby blog has its own TV show today! I feel pretty proud of that. I also love that so many young girls and boys have been inspired by my success to start blogging themselves. That’s the greatest compliment of all.”

Malini’s biggest inspiration is her older siser, Shalini. A renaissance woman, Shalini did a little bit of everything; dabbled in theatre, played state level basketball and is now a high-powered lawyer. A 12-year age gap made Malini the “little baby girl”, and Shalini the super supportive big sis.

This may be why when we asked Malini what advice she had to give to young women wanting to start their own businesses, she jumped in like a super supportive big sis. “Dream it, wish it and then DO IT. I am living proof that hard work and hope are the perfect recipe for success! We now live in a generation where you can pretty much make a career out of doing ANYTHING you love/enjoy. So find what you love and dive right in. The world is waiting for you!”

So what is next for this media queen? “I’m very excited about MissMalini’s World at the moment but I know there’s lots more to come! Rest assured, I’ll be the first to tweet about it :)”