I came from an immigrant family. My mother was born in Siberia and my father in the Ukraine. They were very poor and suffered through the pogroms. I was always grateful that they came to America where I could have so many opportunities. At the present time, I am spending a lot of time giving talks about my parenting style I am also still teaching 11th and 12th grade students in the journalism program at Palo Alto High School. I try to make the learning interesting and meaningful and teach important life skills: creativity, collaboration, critical thinking and communication. I have been interested in how people learn since I was a child. As a teacher, I was able to try out many methods to see which ones worked the best. I came to the conclusion that people learn best when they know “why” they are learning something and when they actually practice “doing” what they learn. Then they don’t forget.

I am currently CEO of a non profit called GlobalMoonshots.org whose main purpose is to spread the teaching of my philosophy that can be easily described by the acronym in my book. T.R.I.C.K. which stands for trust, respect, independence, collaboration and kindness. My goal is to show teachers teach more effectively that students learn with more passion in a classroom where a student feels trusted and respected. It is a classroom where students are given independence and where collaboration is the method of decision making. Classroom rules are made collaboratively, goals are set collaboratively, and collaboration is a way of life. Most important is kindness. Students are willing to take a risk because if they fail, there is kindness and they can do it again. I am also still a teacher at Palo Alto High School in Palo Alto, CA where i have been for 38 years and where I funded the Media Arts Program, now the largest media program in the US, perhaps the world. We have over 700 students , which is almost half the student body, electing to take the classes. I wrote a book called How to Raise Successful People, published by Random House and Penguin Books.that has been a best seller on Amazon this past year. It will be published in 30 languages worldwide and is already in 21.
I travel the world giving talks and am happy to meet thousands of people: parents, teachers and

The biggest challenge I face and we all face is dealing with the force of tradition. People tend to teach the way they were taught even if they didn’t like it as a child. It is the way they are familiar with and it is hard to break with tradition. So my solution is to offer 20 percent time. That means that for only 20 percent of the time students will be using the TRICK model and for Balance 80 percent of the time , they will teach in the traditional method. School districts are excited about this idea and not threatened by it.

Schools don’t have to change dramatically but can change just a portion of the school day and see how it goes. They can change perhaps 30 and 40 percent as time goes one and they see how effective it. Is. Diane Tavenner in her book ‘Prepared’ talks about many of the same issues and comes up with a similar pedagogy. Her book is recommended this year by Bill Gates. I am happy to say that the co-founder of Summit Schools, Chris Bujia is now the COO of Global Moonshots.org, trying to spread the philosophy more rapidly to all public schools worldwide. All children need to feel TRIK in school on a daily basis whether the school is low income or high income. All students rich or poor want to be treated with TRICK. It is human nature.

Success to me is having the self confidence to believe in our dreams and to go after them even if you stumble a few times. If you don’t succeed, having the courage to say your wrong and not get angry at yourself, that is success. Steve Jobs believed in his idea of a portable phone. It was a huge risk; people said he was crazy. He was lucky; he succeeded. But there are many others that fail, they are heroes for trying but many times they feel bad about themselves. The first person they should forgive is themselves! It takes time and they probably took time from the family so the family should also celebrate his efforts even though they failed.

My greatest achievement personally is that I pulled myself up out of poverty as a young woman, married a smart man, and then devised a system that would empower my children from the day they were born. My goal was to have happy, independent children and not children who were obedient, quiet and depressed. I gave them trust and respect starting when they were infants and encouraged them to think for themselves. So I am very proud of my three daughters and their accomplishments but I am also proud of my students and their accomplishment. I used the same system on my students as a did on my daughters. It is the TRICK system where they always felt safe enough to try new things on their own. I am still in touch with hundreds, maybe thousands of my students. It makes me very happy

I would be an entrepreneur because these people are taking risks to create something to make the world a better place in some way. They have a profit motive which motivates employees which is essential but I would make sure some of the profit goes to help the less fortunate in society.

Michelle Obama has been my biggest inspiration. Just read her book and see where she grew up and the challenges she had to overcome. He mother is also a big inspiration for me. Life wasn’t easy but they succeeded.

Another person has been Ruth Bader Ginsberg. Amazing woman who fought through so much discrimination to be on the US Supreme Court. She believed in herself and she models this behavior for all women.

The future holds more travel, more lectures ,about this book, How to Raise Successful People;
I do want to visit India as I think the potential of the country is huge.
I am excited to be involved in any way.

I will also be making a slight transition with the title of this book when I work with corporations, calling it just for my lecture How to Manage Successful People.. Corporations can be more productive when they have happier, more motivated employees. There is also another book coming in a couple years; this one about how to keep the Silver Generation engaged and motivated. Just sitting on the porch or sleeping in every day, or doing nothing leads to a sense disengagement with the world. People feel lonely, useless, unhappy. “It isn’t over, until it is over.” Stay involved as long as possible. Retirement is overrated. 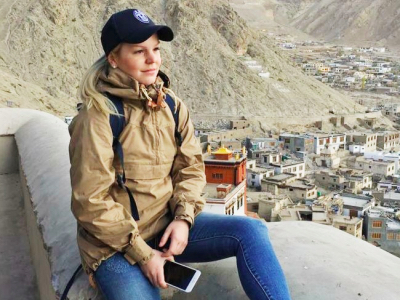