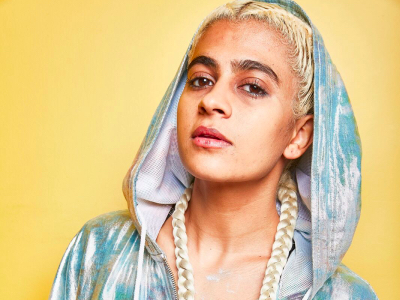 Her music career includes being a touring drummer for artists M.I.A., Thievery Corporation, and Kehlani. Gandhi’s music and activism focuses on female empowerment and Fourth-wave feminism.

I am an artist and activist whose mission is to elevate and celebrate the female voice. I grew up between New York City and Mumbai to two socially conscious parents, and I have always been passionate about music and about giving back. So as a touring musician, I have combined these passions to write music about modern feminism, gender liberation and equality.

In the fall of 2019 I will be releasing my next EP, called Visions, which is the second installment in a series of 3. My first EP called Voices explored the idea of “Own Your Voice”, while this album will explore the idea of looking inward in order to serve your higher purpose outward. I am very excited to share it with the world as I think it will serve as an ample commentary on the state of feminism today globally.

Staying focused on one thing at a time! I have many passions between drumming, DJing, performing live, public speaking and producing new music. I also enjoy fashion – we just put out our summer merch line which has been doing really well! So it’s really about making sure that I am enhancing each of these passions and moving them forward in a responsible and cohesive way.

My greatest personal achievement was running the London Marathon in 2015 bleeding freely on my period to combat the global menstrual stigma that women, girls and trans folks face all around the world. This story received an enormous amount of media attention, and went viral, sparking a global conversation about how we treat menstruation in various cultures.

Surfing around the world. I greatly value the feeling of personal freedom. But I’d probably be fighting for ocean conservancy then. A spirit of giving back is in my blood. Anything I do has to have impact!

My biggest inspiration is Fela Kuti from Nigeria who toured the world playing music about combatting oppression. His music was uplifting and joyful while he would passionately be singing about political issues, fighting for equality and improving the sociopolitical status of the times. This is precisely what I hope to do with my music, and hence why he is my biggest inspiration. I could listen to any Fela record for hours. His music brings me joy and inner peace!

I just want to continue to be a better producer and speaker, because investing in my own skill sets only allows me to be better at spreading my message of love for the feminine.

The future is female ! Thank you.