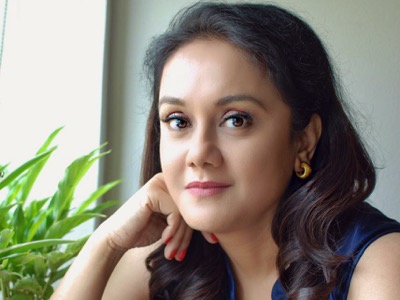 I live in Mumbai, India where I am performing on stage, in films and on television. I’m from a Maharashtrian family and I grew up in Delhi, where I studied Economics at LSR. Theatre and music were always my passion and I have pursued this all through my life. Even when I was living in Jakarta, Indonesia for six years I was performing and directing plays with an international theatre group, The Jakarta Players.

Tell us about your current projects

I have just had two film releases; a big high profile film, FAN, with Srk and a small, sensitive film called, Rough Book. My next release will be a film called, Dil Jo Na Keh Saka which I recently finished shooting.

Meanwhile, I am busy with my serial on Zee TV called, Tashan E Ishq and performing and travelling with my plays.

For a woman its usually the same – no matter how talented or qualified you are the onus of the home is on you. It’s easy to give up and take a back seat. I took a very long break after my daughter was born and getting back to work was hard. The support and encouragement of my family helped, but usually overcoming the obstacles in your own mind is the hardest.

What has been your biggest achievement?

Professionally – it has yet to come. I am never satisfied and am over critical of myself. I always feel I could have done better, tried harder. I guess that’s what drives me.

Personally – my family – the love and friendship we share; and especially my wonderful daughter, who I see blossoming into this vibrant, generous person.

If you weren’t doing what you do, what would you be doing?

I would still be in the media in some way or another. If I wasn’t acting, I’d be working with some production company, writing scripts, working backstage; anything that kept me connected to theatre and film.

All women who follow their dreams. On our TV and film sets I see incredible strong women who pursue their goals in spite of all odds. They will be at a shoot late at night and yet be coordinating home, kids and double jobs. Strong women like Sheryl Sandberg and Indira Nooyi have spoken out about their struggles and this has been inspirational and helpful. It shows that no one has it easy. Every high achiever has had a hard mountain to climb.

I will be hoping for more challenging and meaningful roles. I will definitely pursue my music, which I have neglected till now. More reading, more travelling and better work.

Deepika Amin is a familiar face on the Indian Theatre, Film and TV scenario. Her performance has been greatly appreciated in films like, FAN, with Srk; Humpty Sharma ki Dulhania with Alia Bhatt and Raanjhanaa with Sonam Kapoor. She has worked with renowned directors like Shyam Benegal, Aanand Rai and Manish Sharma.

She has been seen in TV serials like Tashan E Ishq, Junoon, 9 Malabar Hill and Farmaan for which she won Best Actress.

She has been part of Barry Johns theatre group TAG in Delhi and is now a regular performer on Mumbai stage with the Prime Time Theatre company. She has been part of plays directed by Lillete Dubey such as Wedding Album and Boiled Beans on Toast – both by Girish Karnad, Sammu by Partap Sharma and August Osage County by Tracy Letts.