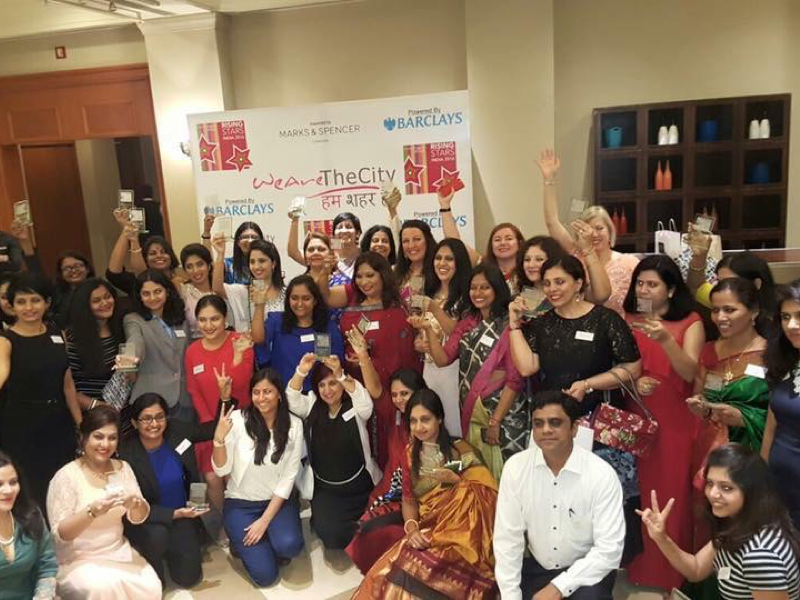 On 9 November 2016, WeAreTheCity India celebrated their Rising Star award winners at J W Marriott, Juhu in Mumbai.  The 2016 Rising Stars were identified through a series of public nominations and two rounds of extensive judging.

Over 576 nominations were received during August from a multitude of individuals from all over India.  The nominations underwent a rigorous round of judging before the judges identified a shortlist of 100 amazing women and ten gender champions in September.  The shortlist was then published on WeAreTheCity India, via twitter and through facebook.  Alongside the judging process, WeAreTheCity also sought votes of support from the public to identify the winner of public vote.

All winners, judges and the awards sponsors, Barclays were invited to celebrate and collect their awards in Mumbai.

The evening was a wonderful celebration of female talent which enabled WeAreTheCity to showcase the Rising Star winners from over 15 different sectors such as Banking, Consultancy, Technology, Investment Management, Journalism, Entrepreneurs, Charities, NGO’s and Wellbeing. Over 90 individuals attended from companies such as Aon, EY, BlackRock, RBS, American Express, Barclays, Marks & Spencer, Credit Suisse and Morgan Stanley.

Vanessa Vallely, Founder of WeAreTheCity said “What an amazing evening it has been celebrating our winners and their achievements, I am so proud to meet these amazing women and welcome them formally to WeAreTheCity’s Rising Star family.  We are looking forward to supporting all of our winners in the future by continuing to profile them on our website alongside providing access to our online learning centre, Careers Club.  We are also extremely grateful to Barclays for sponsoring the awards and to Marks & Spencer for their support”

See the event in pictures here

During the awards, WeAreTheCity also celebrated their gender champions who are working tirelessly outside their day jobs to achieve gender equality.  Also celebrated was our Man of Year, Ashish Bardwaj recognising his support for women and his editorial contribution for WeAreTheCity India, alongside our winner of the public vote, Bhawna Malhotra from Barclays.

The feedback from guests was extremely positive with several commending the awards for providing a platform to highlight the achievements of women working in India.

We would also like to extend our sincere thanks to the events team at J W Marriott and to Jo Gaglani, Committee Chair of WeAreTheCity India for helping to make the awards such a wonderful event.

WeAreTheCity’s winners in India join 155 other Rising Star winners in the UK, taking the total of Rising Stars to 210.  WeAreTheCity are committed to their strategic aim of highlighting the achievements of 500 women who represent the female talent pipeline across the UK and India by 2018.

For all enquiries about the awards including sponsorship, please contact [email protected].