Home > Feature Top Home page > Voting starts in India: What about the women?

Voting starts in India: What about the women? 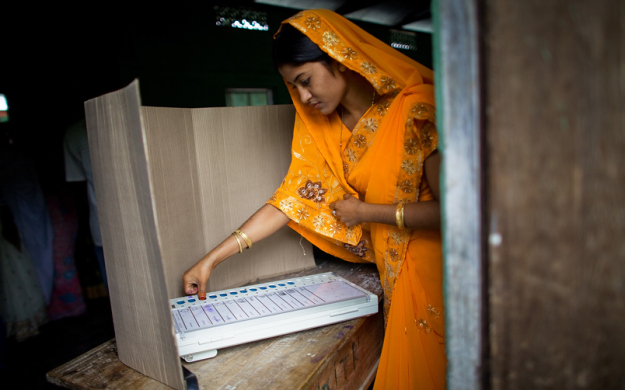 India begins voting in the worlds largest election, for a new government today and candidates are talking up what they will do to increase security for women, but many parties are missing the point of how to make women safe in India and provide more support for women. Voting started in Assam, Tripura this morning with the voting lines consisting of both young and old and male and female voters.

But how have the parties demonstrated and pushed for female centric policies?

No mainstream party has shown enthusiasm in addressing women’s problems in India. As of now, all they are talking about is faster trials for those accused in rape cases. Maybe that strikes them as being a strong pro-female statement. But this is the reactive behaviour drawn by the government and parties and does not address much more in our way.

Last year it increased the penalties for rapists – including introducing the death penalty when the woman dies from her injuries. It also expanded the scope of what is classified as sexual violence – for example previously ‘stalking’ was not a crime.  The government have provided more police to work on crimes against women, put more police on the street, and set up a hotline for women to ring when they are in danger.

Discrimination against the girl child and atrocities against women are a blot on our collective conscience,” party chief Sonia Gandhi said while opening the gathering. “Gender issues are fundamental and should be of concern to all of us.

The steps are tangible and show a degree of political will to try to make India safer for women – but they haven’t stopped the rapes or sexual harassment.

There was some attempt to change this. The Congress party’s weekend “Chintan Shivir“, or brainstorming session, in Jaipur put a special focus on women.

“Discrimination against the girl child and atrocities against women are a blot on our collective conscience,” party chief Sonia Gandhi said while opening the gathering. “Gender issues are fundamental and should be of concern to all of us.”

The party came up with a new slogan, “Pehle mahila ka samman, phir Bharat nirman” — First respect women, then build the nation. This could be seen as an attempt at targeting the women voter and is a step in the right direction in terms of placing women in the forefront of voters.  But where is this now as we reach election time?

According to a United Nations report –  it will take more than 50 years for countries like India to achieve gender balance in politics. With little as 59 seats being occupied by women in government out of 800 there is a long way to go to enable a gender balanced government.