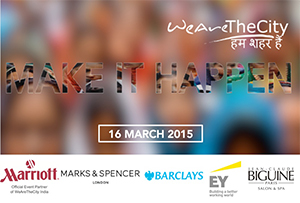 Only a few days to go before WeAreTheCity India celebrates International Women’s Day. Register now to be sure of your place at our event on 16 March at JW Marriott Hotel Mumbai.  Our 2015 flagship event will be brimming with inspirational women, giving their views and ideas on the theme, ‘Make it Happen!’  Our line-up will include Apurva Purohit, CEO of Radio City and author of the best-selling novel, ‘Lady, You’re Not a Man’, WeAreTheCity’s CEO, Vanessa Vallely and a host of successful, professional women from across India. The event will also feature a business dress fashion show from Marks and Spencer, with hair and make-up styled by Jean Claude Biguine Paris.

In our last edition we featured three of our panelists;

This week we are focusing on;

For additional information on the event and our sponsors, click here.

Apurva Purohit – CEO of Radio City and Author of best-selling book, ‘Lady, You’re not a Man’

Apurva Purohit is the CEO of Radio City 91.1 FM, an IIM – B alumnus (batch of ’89) and has been managing media organisations for the last 25 years.  Apurva specialises in media businesses and brands, and prior to her entry into radio she worked in television with BCCL and Zee Telefilms. She has launched successful TV brands including Zoom – India’s first lifestyle channel and also fashioned the re-launch strategy for Zee TV, the flagship channel of Zee Telefilms.
Apurva is credited with bringing the concept of consolidated media–buying to India by launching the first ever independent media buying agency, Lodestar in 1995. Lodestar is amongst the top five agencies in the country today and a part of IPG, one of the big four global advertising holding companies in the world. She was the first President of the AROI, the Industry body of the radio industry and is also a member of the Ministry of Information and Broadcasting’s Sectoral Council on Innovation as well as being an Independent Director on the board of Mindtree Ltd.
Over the past eight years Apurva has led Radio City through a cycle of ‘Build-Grow-Consolidate’ partnering IVFA, one of the oldest and most experienced private equity players in the country with ~$1.4 billion under management. Under her leadership Radio City has grown from a four-city station to a national presence across 20 cities. Radio City has also won several best practices awards and been voted amongst the best places to work in Media and across industries by the Great Place to Work Survey for the last three years.
She lectures extensively at institutes and corporates, on issues ranging from leadership skills and building great organizational cultures, managing diversity – how men and women can work together, creating the balance between home and work, and making successful career choices. She is also the author of the national best – selling book “Lady, You’re not a Man” – the Adventures of a Woman at Work, published by Rupa Publications.

After obtaining a degree in Mechanical Engineering, Roohi realised that her true passion lay in building a happy, healthy work environment so she changed paths to study HR and has not looked back since then. Roohi now has over nine years experience in HR and has been leading the HR team at Jean-Claude BIGUINE, India for the last six years. BIGUINE India, is growing by leaps and bounds every year and as a part of the core team Roohi has been instrumental in executing strategic initiatives on the HR front and beyond.
Roohi specialises in talent acquisition and talent management of national and international artists. BIGUINE, India has a growing team of expatriate women and men and the HR team has been successful in retaining most of them for five years and more. Inspired by Jean-Claude’s statement, “Beauty is always there.. it needs to be enhanced with the right resources who practice it as a passion”, Roohi believes the same applies to talent as well.

Outside her busy career Roohi finds time to read, travel, shop and have an adventurous time with her four year old.

Dr Bhaloo collaborated on the creation of a manualised training programme for local clinicians treating post-war trauma in Rwanda and on a paraprofessional community health worker training manual for mental health medical clinic establishment and development initiatives for the treatment of gender-based violence crimes in Uvira, Democratic Republic of Congo. Sahar has also worked with physical trauma and chronic illness patients and with adult survivors of childhood sexual abuse. She has a research background in the study of immigrant Acculturation, Acculturative Stress and Stigma in Indians living in the US.

Dr. Bhaloo spent the first 18 years of her life in Cote D’Ivoire, West Africa before moving to Canada and then the US to complete her undergraduate, graduate and post graduate degrees in psychology. Sahar currently lives in India working on trauma gender-based violence increasing access to services and promoting stigma reduction.

Shalini is currently the Head of Human Resources, in India and South Asia, handling both Retail and Sourcing businesses. She has been with Marks and Spencer for the last 6.5 years.

Over all in her career of 20 years across various industries like IT, ITES, Pharmaceuticals and Retail, Shalini has been successfully delivering results by contributing to the development and accomplishment of business plans and objectives by playing the role of HR Business and Strategic Partner.

Shalini has been translating strategic analysis into successful business initiatives, resulting in mutually beneficial partnerships between employees and the business. She has been involved with major organisational transformation activities including strategy formulation, leadership development, talent management, succession planning, employee engagement and change management.

She has been successful in embedding the organisational values of inspire, innovate, integrity and in-touch to her team by exposing them to business thinking and making them accountable and responsible for executing the HR strategy. For her continuous and outstanding contribution in the field of HR, Shalini has been recognised by various HR Societies including World HRD Congress, Human Capital Summit and Global HR Excellence.