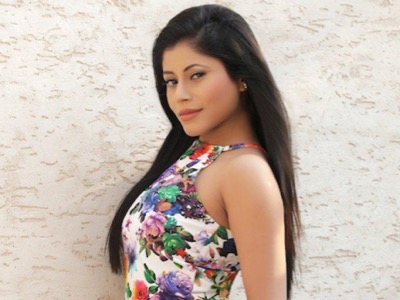 Swait Sharma is a member of our national body-events and entertainment managers association- EEMA.

I am a Delhi born girl living and working in Mumbai from the last seven years. I started my career in Anchoring from Delhi and continue to work for agencies all over India and have also traveled to countries like, Dubai, Spain, Thailand, Australia for work. I have represented brands like TATA, Castrol, Bodyshop, Filmfare etc.

As an anchor I, have managed to learn about and deliver in various forms of events from corporate awards, launches, government festivals, and also family events. I also starred in a hindi feature film “overtime” as a lead alongside actors like Satish Kaushik, Vijay Raj, Zaakir Hussain. Stage is my first love and I really enjoy spreading joy to my audience. I am also currently working on developing a ‘well being’ training programme which i hope to complete and launch in a couple of years.

Currently I am focused on expanding my events market. Some of the interesting events I did this year were – FILMFARE red carpet for Schwarzkopf, Inductotherm – Founder Mr. Henry Rowans memoir building inauguration & ONGC – B&S assets AAROHAN awards.

I think the biggest challenge we face is mostly within ourselves. There were skill , specially related to networking and marketing that i struggled with but I’d say I am better with it now. I always continue to learn.

My biggest achievement overall has been the bad financial phase I recovered from where i was continuously hand to mouth for three consecutive years.  My shifting period at the age of 20 from Delhi to Mumbai was a big milestone for me personally.

I am pretty happy and satisfied with the way i have matured in life, and am surrounded with quality family equations, friends, and work colleagues. I have also recently adopted two cats, that would be i guess my latest biggest personal life achievement.

If you weren’t doing what you do now, what would you be doing

Lawyer, for sure. I still may do LLB later in life.

Growing up the female icons I watched and aspired to be like were- Oprah, Madhuri & Sridevi, and a whole bunch of influencers and entertainers had their little little impact on my psyche.

So much, I am almost overwhelmed at the thought of the number of things id like to do. There’s – acting, writing, and training /coaching. Being a freelancer gives me flexibility of time and i intend to make the most of it. There are also some key social issues that I’d like to probe into at the right time.

Born in a lower middle class background, to two government serving parents. Used to be taken to bus stop in my Dads scooter till 15 until our first maruti 800 arrived. Very few people know this but because i dropped out of college half way, my only formal education is high school that i finished from Faith Academy, where I got a chance to build my extra-curricular skills, that became a source of my career. Humble background big dreams, not in terms of materialism but in terms of making a difference and living a fulfilling life. My first job was 3000 a month, now that’s what i can spend in one lunch or dinner. Discovering event industry was the turning point of my life and i hope to continue being an asset. From acting in film to performing on more than 1000 stages, travelling all over India and abroad, life has been a continuous adventure.