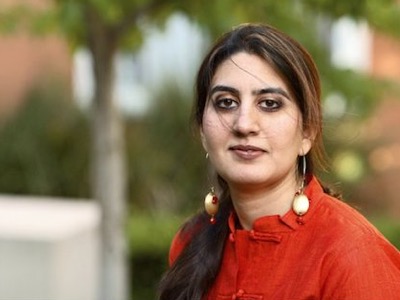 Dr. Shruti Kapoor is a gender equality activist, economist and social entrepreneur who is passionate about girls and women’s safety. Shaken by the horrific gang rape in Delhi 2012 that caught the attention of the global news media, she founded Sayfty in June 2013 to educate and empower women and girls of India against violence. The initiative aims at not only creating awareness of laws and legal rights around the issue of violence against women, but also uses digital media, tech-for-good, and storytelling for women’s safety.

In 2016, The White House nominated Dr. Kapoor as a change maker for The United State Of Women Summit 2016. She is the winner of Barclay’s We Are The City 50 Rising Stars Award in 2016, India. Sayfty was awarded the People’s Choice Award by Femverstising (2015) and won a State recognition award by the UP government in India for the organization’s work on safety and education of girls. In 2015 also, Dr. Kapoor was awarded the Rex Karamveer fellowship, “to share impactful ideas for action and transform lives through projects and ideas of hope,” and was awarded “Woman of the Year (third prize)” by Regional Council, Aosta Valley, Italy.
Dr. Kapoor holds a PhD. in Economics from University of CA, Riverside, and has consulted for the World Bank in Washington DC. She has also served as an Adjunct Professor of Economics at Occidental College in Los Angeles, CA. Most recently, she served on the UN Inter-Agency Network on Youth Development Working Group on Youth and Gender Equality Task Force and Social Media Committees to inaugurate the UN Youth Forum for the Commission on the Status of Women.

Dr. Kapoor has addressed many public forums including the Youth Assembly at the United Nations (August 2017, February 2017, August 2016), Merit 360 (September 2016) and Make Room India (October 2016). She is dedicated to media, digital and traditional, to raise awareness to make our cities safer for women and girls.