I read Sceadu in four nights, simply because I was hooked!

From the very beginning it was full of intrigue and mystery, begging the reader to delve into the book to gain the answers. It was full to the brim with rich thought-provoking descriptions allowing the reader to picture the surroundings as if they were actually there.

One of the main things I loved about this book was that you were thrown right into the storyline straight away which was very refreshing as there were no long, drawn-out introductions. It was fast-paced and flowed which made for a really nice read. There were no overly long chapters – everything was short, fast and snappy!

Having read countless urban horror and fantasy books it is no easy feat to create a world and fill it with creatures but that’s exactly what the author Prashant Pinge did.

The introduction to the four main characters was brilliant. They each had strong personalities that really shone through. As the story progressed, so did the characters. Without ruining the book for anyone I have to touch on Robbie and Steven’s characters. Robbie; the immature bully who transformed into a brave and courageous brother and cousin. Steven however was my favourite from the beginning. I found him to be very funny and just all around likable. He was the geek of the group but his intelligence and wit pitted against those who were older than him impressed me to no end. He was the unsuspecting hero with a bag of tricks that kept on giving. For every barrier they had to face, I couldn’t wait to see how he would figure out a way through it.

The dynamics between the four children in the book were fantastic. The depth of their love for each other was strong throughout and I liked how they looked out for each other regardless of their age, with each one taking risks with their lives in order to save their kin. It reminded me of my own brothers. I could so easily picture us there and we would have done pretty much exactly as the children in the story did. As an adult it made me realise that we do take children for granted in terms of what they can handle and accomplish. Their sheer determination was an inspiration and a joy to read. I felt I was able to watch them grow as the book continued.

The fact he took something we barely pay attention to and turned it in a mystical world of its own was incredible.

The plot was great. I loved all the baddies and how the prophecy was the undercurrent to everything. But the most impressive part of the book was the author’s vision for the world of Sceadu. Having read countless urban horror and fantasy books it is no easy feat to create a world and fill it with creatures but that’s exactly what the author Prashant Pinge did. Everything from the names of the places to the distance and how long it would take to get to each one was carefully planned out, including the different terrain each would have. All of the creatures had a back story and were not just included for the sake of it. There were twists in creatures we would be familiar with but also entirely new creatures that Prashant created.

Overall the book for me was a complete success; it had everything I would have expected for a young adult novel. The fact he took something we barely pay attention to and turned it in a mystical world of its own was incredible. The idea to take our shadows and create something from it was brilliant. I loved how he tied it into our world and gave a reason for them, making the reader actually think is that what my shadow contains? Is that why we have shadows?

I cannot answer these questions for you instead grab a copy of the book and find out!

Sceadu releases globablly on November 10th, 2014 and is available for pre-order on Amazon. The link is http://amzn.com/B00NVCV0I0.

Leonnie Fisher – Head of Editorial & Operations at WeAreTheCity. She is an avid book reader and aspires to become an author herself one day. Leonnie also runs her own design company –  Destiny Designs. 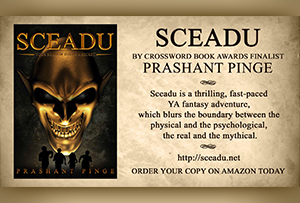