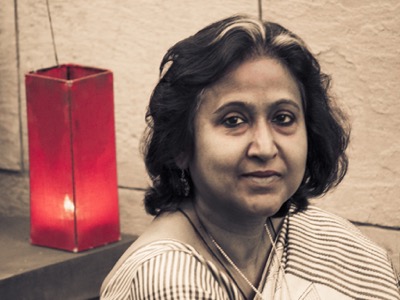 Sangeeta Gupta is a poet, an artist and a film-maker. She has directed seven documentary films and was the recipient of the 69th annual award for drawing in 1988 and the 77th annual award for painting in 2005, by All India Fine Arts & Craft Society.

Sangeeta’s first solo exhibition was at the Birla Academy of Art & Culture, Kolkata in 1995.  Her 29 solo shows have been held all over India and abroad at London, Berlin and Greece, to name a few. Her 26th solo was inaugurated by the former President of India; Dr. A.P.J Abdul Kalam in August, 2013. The show was dedicated to Uttarakhand. Her paintings are in the permanent collection of Bharat Bhavan Museum, Bhopal and Museum of Sacred Art (MOSA), in Belgium.
Widely traveled, Sangeeta lives and works in Delhi.

I am a civil servant, an Indian Revenue Service Officer of 1984 Batch presently working as Principal Commissioner of Income Tax J&K. Besides my very demanding job, I am also a poet, artist and documentary film maker. I’m closely associated with an NGO which promotes art and culture.

Any current projects or initiatives?

Through this NGO I am doing a project in Uttarakhand for encouraging art by granting scholarship to fine art students. In addition, I’m doing a project in J&K for the revival of Basholi art. I’m also in the process of finalising the publication of Ekam; my new book of poems with photographs of Dal lake, to be launched in January.

There are challenges always. I like to challenge myself to do more in my profession and creative pursuits.

There are many achievements, big and small. However, my greatest achievement so far is the respect I get for being a just and fair officer and a good human being.

If you were not doing what you do now, what would you be doing?

I love what I do so this is what I will always be doing.

I have so many inspirations but in particular Mother Theresa and Dr.APJ Abdul Kalam.

I accept life as it comes. I live in the here and now. As a long term goal I would like to build a art resource centre in to promote art and the culture of India.