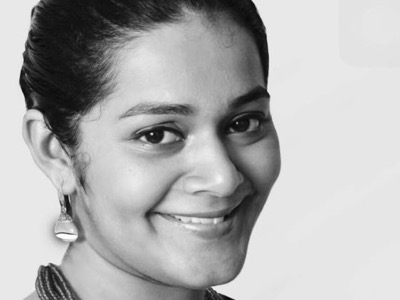 Puja’s passion and love for innovation has been instrumental in ensuring that Kandida becomes a name to reckon with across the country. This 23-year-old is driven, always on the go and is ready to explore new avenues. Puja, the young entrepreneur, has always had an eye for detail. She has been able to understand the lifestyle of her target audience and thus come up with Kandida. A dreamer and a believer, Puja’s inclination to create and reinvent, has pushed her to become a successful designer. Versatile, independent and an ethnic lover are some words that describe Puja.

Primarily from Goa, she spent eight years of her life in Germany. She is grounde and in touch with her roots. Simple and traditional, Puja finished her schooling from St. Josephs Institute, Goa. Puja did not end up being a tech geek, and took up a vocational stream in Commercial Garment Designing and Marketing at the Carmel College. She is also a Fashion Design Graduate from NIFT, Bangalore.

The brand, Kandida is a dedication to her three Idols of her life. Her grandmother Kanchan, father Dinesh and grandfather Damodar. The family lived in Germany for more than three decades and were referred to as ‘Indisch Artz Famille’ (The Indian Doctor Family). Despite all the German influences, India was the only source of inspiration for this brand. The name Kandida was created using the first syllable of their names, Kan(chan) + Di(nesh) + Da(modar) = Kan-Di-Da.

Puja was always passionate about Indian ethnic wear but felt that there was a need for something fresh and aesthetically pleasing. Hand printing techniques ruled the design scene and Puja began her journey playing with fabrics sourced from organic roots paired with handmade digital funky prints. Puja wanted create experiences, rather than just outfits. The brand is an online designer wear brand that sells Indian eco-ethnic funky wear. It is also available on shopping portals like Amazon, Flipkart, Shopclues, Cheerkart.com, Paytm, Snapdeal, Craftsvilla, Shopo and Kraftly.

Puja is multifaceted and wears many hats. She is also the CEO of Cheerkart.com and founder of a travel group 100 Sundays Throwback Goa. She has many awards and accolades in her kity. She has been awarded as the best Rotaractor of the Year 2015 at Rotaract Club of Vasco-da-gama for her excellence and Professional, community and Club service for Rotaract Vasco-Da-gama. She also showcased Kandida’s latest collection, Escape-O-Nature, at Bangalore Fashion Week Winter-Festive 15th edition along with South Indian Actress Shubra Aiyeppa.

In Goa, Puja’s efforts and dedication as a budding designer and entrepreneur has been featured in Timeline Goa Magazine, Vasco Watch, Goan Observer, Viva Goa, Nahvind Times(Zest Edition), Business Goa Magazine, Danik Herald, Tarun Bharat, Gomantak times, Gomatak Varta, Goa TV, RDX Goa and Goa doot local TV channels. She has also had the opportunities to speak about her label and achievements on air for Hello Goa with RJ Pankaj at Radio Mirchi Goa 98.3 FM. In Bangalore she has been featured in many newspapers like Indian Express (INDULGE), Eenandu, Andhra Jyoti, Deccan Herald and Deccan Chronicles. In August 2016, she got a chance to write an article for the startup designers on entreprenur.com. Many online bloggers like werearethecity.in, unkrate.com, whatshot.in, lookbangalore.com etc interviewed her as one of the budding designers of India. She was also invited to be the judge for a Goa state level Fashion Show Topsy-Turvy at Ravindra Bhavan, Goa.