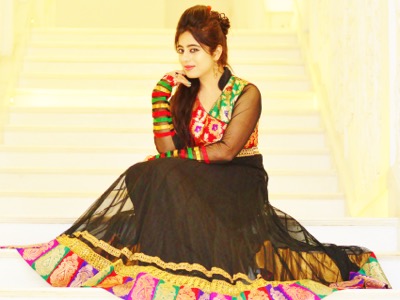 Globally, Khushboo Kapoor is the only one and First Youngest Female DJ (Disc Jockey) from the whole world who is a doctor and who is also working as a most accomplished Anchor, Deejay and Singer

Having done more than 3000 concerts and shows worldwide for almost 1500+ Corporates, Khushboo is all set to release her first Debut album as a singer.

Her skills in anchoring, Djing and Singing has got her featured in world renowned magazine FEMINA in its anniversary Issue in the cover story as the most sought after Female Anchor & DJ of India. She has also been covered as the Most Desirable Corporate Speaker of India in a reputed Magazine for weddings called as Shubh Weddings.

Moreover, she has hosted shows with Indian Cricket Team Captain Mr Mahendra Singh Dhoni under the patronage of his company Rhitiz Sportz. She has been the official emcee and Deejay for shows for BMW pan India in 2016.

She has anchored International Events across the Globe with eminent Bollywood Personalities. She is the only one Corporate Speaker from Rajasthan who has done shows with maximum of the celebs from Bollywood, Sports, Arts, Literature, Music and Politics. Khushboo is counted as first and foremost emcee for Highly reputed Government events. She is the one who handled the complete show of Jaipur Metro Launch at Rajasthan in the presence of Honourable CM Smt. Vasundhra Raje Ji.

She has performed as an anchor for more than 2500 episodes of different programs of different TV Channels like Doordarshan, ETV, Discovery, Star Cricket, Star Sports, National Geography. She has done extensive social work as a corporate speaker for Documentaries for National Rural Health Mission, Department of Social welfare, AMIC INDIA and many more.

She has rendered her voice for more than 4500+ Voice Overs, Jingles, Radio and TV Spots of variety of Commercial products and Documentaries. Khushboo has been interviewed widely in National Dailies and Blogs of repute like Times of India, Amar Ujala , Mid Day , Afternoon DC , Punjab Kesari , Bollywoodhungama.com, Bollywoodtrade.com and many more

Her growing achievements in Mass Media and Corporate sector grew her fan base too. She has more than 1 lac views on her youtube channel, 20000 followers on her Facebook account with 5000 likes on her FB page. In addition to this In 2016, she has got 5 lacs hits on her website.

She is the First winner of Rajasthan’s Best Anchor Award held at Hotel Marriott, Jaipur by BITA

She is the Recipient of Samaj Ratna by Rajasthan Jan Manch , Jaipur