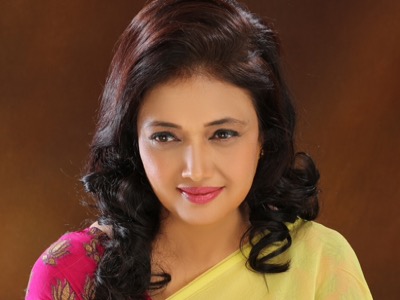 I am a proud daughter of the late classical singer Smt. Nirmala Devi and the late actor Shri Arun Ahuja. I am the elder sister of ex-MP and actor Mr Govinda and mother of leading actress, Ragini Khanna. I have starred in programmes like ‘Beauty with Astrology’, ‘Sitaron ke Pankh’ and ‘Ashmita’ on Care World TV; ‘Mano ya na mano’ on Star One; ‘Mera number kab aayega?’ and ‘Kismat Konnection’ on Star News; ‘Bhavishya phal Sitaro se hal’ on E24/News 24; ‘Gaagar mein sagar’ on etc channel and ‘Lakeer ke Fakeer’ on ZOOM.

My 92.7 Big FM radio show, ‘Seher’ was a super hit amongst all radio stations across the country. Apart from this, I was also making a show ‘Connection Kismat Ka’ on the same radio station, which was also popular around the country.

I have recently completed my Doctorate.

I was also a columnist for many reputed newspapers including Navbharat Times, Danik Bhaskar and Samna, amongst others. I have created nearly 300 lectures in various institutions like Agarwal Samaaj, Rotary Club, Lions Club, Image Welfare Achievers Forum and I am a writer of ‘Positive Health Show’ on Zee TV.

Recently, I did a Marathi programme on the DD Sahyadri TV channel called ‘Sakhi Sahyadri’ for Doordarshan, which had a tremendous response from the people in Mumbai.

What has been your biggest achievement?

I have released cassettes and CD’s for various companies like HMV, Tips, Plus, Tarana, T- Series and Venus, amongst others. I have also written 14 books and I am the member of IPRS and the Writer’s association. I have even written the story, screenplay and dialogues for the movie ‘Aunty No. 1’ and ‘Ek Nai Disha’. I have been a background scorer, lyricist and music director for the film ‘Sukh’. I have written advertisements like Navratna Tel, Sona Chandi Amritprash, Ultra Tech Cement, Lehar, Mirinda, Aircell Apps, Bryllcream, Good Night and Pillsbury atta. I have also been an editor of Jaipur based magazine, ‘Honey Money’.

I have been felicitated by ICICI Prudential Life Insurance Ltd, for excellence in reading the horoscopes and lectures. I was awarded as the best mother in the Clinic Plus Prerna Awards, organized by Doordarshan.

Recently, I was awarded a Laxminarayan Vaasudev Dwivedi honor for being a renowned astrologer for my work in astrology and the betterment of mankind.

I am concentrating on a monoact show, ‘Jaago’, which is an inspirational drama on stage. The aim of this show is to motivate people to enhance their abilities and improve their lifestyles along with good health, both inner and outer and to get out of all sufferings. This drama has an audio/visual background, which makes it unique from other shows. The show is fictional and starts with the story of a sufferer who has lost all hope and ends in marvellous changes with the help of positivity, astrology, dhyan, yoga, exercises, food habits and motivation. ‘Jaago’ is purely a light, sound, musical and motivational show, which gives you inner strength to overcome all your hurdles of life. I myself perform in ‘Jaago’.

I am also promoting my YouTube channel ‘Beauty with Astrology’, which has more than a 1000 subscribers and more than a lakh of views.

I am also promoting my YouTube music channel, ‘Kaamini Khanna Music’. Very soon you will be able to listen and watch my music tunes and songs on this channel. Being the daughter of the late legendary classical singer Smt. Nirmala Devi, I am also concentrating on singing classical music in fusion form. Performing side by side with Maata Chownkis, I also render shivirs and give lectures in corporate, institutions and organisations.

Being a single parent and managing the home while also managing my daughter Ragini’s work. Apart from this, working on many projects individually and also handling my concern, ‘Beauty with Astrology’. I have to give myself a specific time to practise my music. Three hours of meditation and one and a half hours of exercise is a part of my daily routine. I have faced ill health in my past so I have to look after my health in particular. I am on the road from seven in the morning till nine at night.

I have loved dancing ever since childhood. Singing, writing and music direction was in my blood. At the same time, I was also practising astrology and meditation. So for the bread and butter of my family, I use to do any work related to these fields. While working in these fields I even got opportunities in the advertisement world. I worked as a consultant in Sahara Manoranjan and as a content head in TVC skyshop. I did many shows for ‘Beauty with Astrology’ on various television channels. However, I was much more happy creating a show called ‘Seher’ as an R.J. on 92.7 Big FM. Lakhs of people contacted me – I had to open my own call centre! I am very happy that I got this opportunity to serve and help people for free, without any charges of phone calls on radio. People appreciated and respected my work. Some of them also called me pacifier and Guru. The other show was for Doordarshan on DD Sahyadri TV channel called ‘Sakhi Sahyadri’, which I enjoyed doing and where I got a lot of respect and appreciation from the people of Maharashtra, India.

I would have become actress, because I am a very good dancer – and I am also fond of acting.

My biggest inspiration is my almighty Maa Durga and Jivadani, and my mother, the late Smt. Nirmala Devi.

In the future, I see myself as a big pacifier, healing the minds of people, spreading love amongst people. At the same time, I want to sing and dance on stage, as my mother use to do. I really think that with the support of some eminent personalities in society, the corporate world, institutions and organisations then I could do something for the betterment of humanity and society. I hope I can heal them as I healed myself.