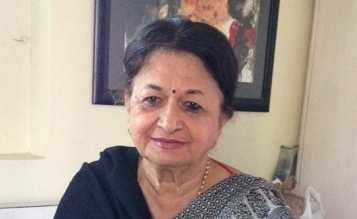 If I am asked to describe my life and work, I would succinctly use these three words to outline my personality in a nutshell. Also, I would call myself a South Mumbai woman – I was born here, went to school and college here, worked my entire career here, got married here, brought up my children here and have lived here all my life….

I belong to a generation of women who had never seen computers nor learnt information technology in their schools or colleges – in fact, many Indian women never went to college and after school. They were married as soon as a worthy bridegroom was seen on the horizon.

Mumbai, the city of my birth, still had trams ringing their way through the streets and everywhere there were green patches which gave the city a quaint colonial look. But within its womb, was volatile, surging Independence Movement of India. The green grounds of Mumbai were open to thousands to hear Mahatma Gandhi or Jawaharlal Nehru who were the heroes of the movement. I lived in south Mumbai where this movement reached its acme.

I was fortunate as a schoolgirl to see these leaders and sometimes even work as a student volunteer at the Gowalia Tank Maidaan – now the August Kranti Maidaan. Though my school belonged to the Church of Scotland, my teachers were dedicated to the Independence Movement and taught us the glorious chapters of India’s history and Sanskrit with great enthusiasm. My father was then a fairly new citizen of Mumbai, having come from his native North Kanara to do business. Seeing my grades in studies and liking for social work, he sent me to college saying he was happy for a daughter to be successful. After I completed my B.A., I enrolled at the Govt. Law College and got my LLB. too. At this juncture, my father started to dream about making me appear for the IAS examination. But fate had other plans. I was destined to be a media person so my English teacher persuaded me to take literature and creative writing. To my father’s credit, he agreed and sent me to London – alone and just 21, which was brave in those days – to study journalism. The double advantage of this three year study was that I qualified as a media person and met my future husband whom I married on return to India.

My opportunity at the Times of India’s new magazine Femina was a lucky chance too. I was at a conference where I met Mr. J C Jain, then General Manager, Times of India, who asked me what I was doing and offered me an opportunity to join Femina with its first issue. I never looked back from there and worked with dedication to do my best under the guidance of Frene Talyarkhan, the first editor. Two years into the job, I was good at writing features, interviews, speeches and summaries of long major events. Those were the days when John F Kennedy’s charisma was sweeping the world. India and the USA were finding new cultural bonds and I was offered an opportunity to work with the US Information Service where we would facilitate visits of celebrities and write for various papers.

Meenatai Thackeray gives me the award

Here a new world opened up to me when I met stalwarts like John Kenneth Galbraith, Pearl Buck, Red Nicholls, Arthur Schlesinger and many other top names from the USA. I was part of the cavalcade when Jacqueline Kennedy came to India on a goodwill visit. I travelled to write stories of the collaboration efforts of the Peace Corps and the US-India collaboration. However, I was in for a change when the Times of India asked me to return to the Old Lady of Boribunder as Asst Editor of Femina with a promise that I would take over as Editor when my senior retired. This happened soon and in 1973, I became the editor of Femina.

We, an all woman staff, were convinced that this first English women’s magazine had a great role to play in changing the lives of all Indian women.

As a woman, I could see the opportunities coming the magazine’s way. We, an all woman staff, were convinced that this first English women’s magazine had a great role to play in changing the lives of all Indian women. In the following 20 years, till I retired, we fought many word battles with various social and political agencies of the government to help change the laws of India wherever they were discriminatory to women. Few will believe that till the 50s, women could not start their own bank accounts without the signature of the husband nor could they take a loan without sanction from the husband. Dowry was a huge burden on families and few women had access to higher education because marriage was more important than getting a university degree. All this changed over the years. Most importantly, since Femina was an English fortnightly and went to every corner of the country, we had the opportunity to try and create the identity of an ‘Indian’ woman. Hitherto, there were distinct categories of women in India – the South Indian, the Punjabi, the Bengali, the Maharashtrian or the Gujarati – this is how people identified themselves. They never said they were ‘Indians’.

I think my greatest achievement was the work I did to unite Indian woman as one rather than as different people from different communities.

Femina changed this by taking three areas of a woman’s life and unifying all women through them. These were food, fashion and furnishing a home. In the 20 years that I worked for the magazine, we succeeded in creating the persona of the Indian woman through these and more ties – offering them financial self reliance, education, an inclusive Indian personality and pride in their heritage. We actually had an ad wherein a tribal woman was shown dancing and the copy said, “We know she does not read Femina. But the woman who will change her life does and that’s what counts.” During my Femina days too, I met some of India’s great masters – among them were Pt Ravi Shankar, Pt Jasraj, Sitara Devi, Pt Bhimsen Joshi, Lata Mangeshkar, Homi Bhabha, M F Husain, S H Raza, Rajesh Khanna, Amitabh Bachchan and Jaya, Hema Malini, Dev Anand, Dilip Kumar and scores of other luminaries who added a little glitter to my life which added a gentle light to my life too.

I think my greatest achievement was the work I did to unite Indian woman as one rather than as different people from different communities. By the time I finished my stint at Femina, the magazine was selling brilliantly and earning fabulous ad revenue. We also successfully set up the Miss India contest which has today become such a big national event in recent years. A great side effect of my career here was the opportunity to travel the whole world to learn from women of many countries and give them a glimpse into an Indian woman’s life. I went to the UK, all countries in Europe and exotic countries like the Fiji Islands, Venezuela, Yugoslavia, USSR, Japan, Maldives, Mauritius, the whole of the USA and many other countries. Being the editor of a successful magazine for women, I met game changer celebrities like international orators, actors, writers, artists and of course India’s prime ministers; Indira Gandhi, Rajiv Gandhi and Atal Bihari Vajpayee. A memorable interview for me was one with the Shah and Shahbanoo of Iran when they came on a state visit to India.

But this chapter of my life finished when I retired in the nineties. Luckily, it was opportune that the media burst into a storm in those years. Satellite TV, computer journalism, web writing, website building and information technology became the new tools of the media and hundreds of opportunities came my way. I edited house magazines, wrote for innumerable magazines and websites and had my own website too. I travelled to many countries as the world became a closer community because of fast communications. Among these were Iran, Sri Lanka, Britain, Ireland and of course the whole of India. I worked for wonderful projects like the sound and light shows at Somnath in Gujarat, Udaygiri Caves in Orissa and the Ganga water show in Haridwar. It would not be an exaggeration if I say that I had more work and opportunities after retirement than while I worked in a regular job.  Meanwhile, both my son and daughter made their careers in the UK and Ireland respectively. Our grandchildren – four of them – were born in those countries over the years and they were the bonus from my son and daughter to me!

My biggest challenge in my career was to convince Indian society that ‘women’s liberation’ was not a socially destructive movement for India.

Time has flown and I am not able to travel much now. But my writing continues. I support social causes – such as Tiger Watch, a conservation project – that seem right to me and I do as much work as possible. I enjoy music, theatre, travelling, meeting friends and looking at my growing family.

For all this, I have to thank three people. First is my father who dreamt big for me in an age when daughters were to grow up and marry. Second is my maternal family who did not put any limitations upon me and supported me at every step of my career. For instance, my Masi who brought up my children, insisted that I go to Bangla Desh during the 1971 war, to report the sorrow of the women of that country, saying that if I died, she would bring up the children. And most important, my husband who applauded every achievement of mine and supported me wholeheartedly through good and bad times. Without all these wonderful people who shared my dream with me, I would not have been able to do what I did in an age when ‘working women’ were almost derogatory words!  My biggest challenge in my career was to convince Indian society that ‘women’s liberation’ was not a socially destructive movement for India. My faith has been proven with millions of Indian women working hard to give our country a great future and to bringing up magnificent children. My greatest challenge was to build the careers and characters of my children within the time available to me. I worked maniacally hard to make a success of both sides of the coin of my life – at work and at home. What’s more, I did everything I wanted to do for myself too. So I am a totally contented woman today.

Editor, Femina, Times of India, Mumbai, India for 20 years and earlier assistant editor for 7 years. One of the major social issues Femina dealt with was the status of the girl child. In a male dominated society, Femina set out to promote a life of dignity for women, starting with the girl child and her rights! From there on for more than half a century, Femina has worked for the empowerment of Indian women.

Creator of the Miss India annual show for Femina from 1966 to 1993 and making it the vehicle for launching top Indian models and film stars.

Writer of commissioned books including the Coffee Table Book for 2011 for the Leela Hotels, Palaces & Resorts and the 2011 Chetana book on Thali Meals of India.