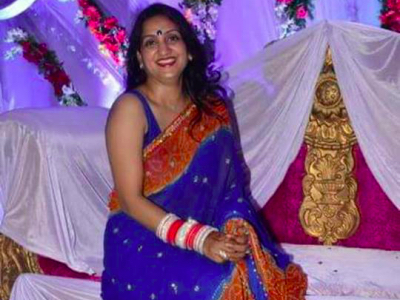 I belong to a middle class business class family. My father Sri Mahesh Chandra verma was associated with Bajrang Dal, RSS and other social, cultural organisations. My mother Smt Maya Verma is a perfect housewife and mother of  four brother and sisters amongst which I am the third one.

Since my childhood I witnessed social, cultural activities and events around me which created a kind of fascination in my mind from the very beginning as during Ram Janm bhoomi controversy i saw so many fast changing events that made me tough and bold.

Also we have been brought up with all freedom and without any gender discrimination. In early days myself and my younger sister Neetu, who is just one year younger to me and we both look like twins and treated by everyone as same, started taking part in Judo sports  and  earned me many medals at national level.

In school i also joined N.C.C. and earned highest level certificate. I was so much passionate  that once I was on the verge of becoming lieutenant in Indian Army but narrowly missed in screening on physical tests. This will always remain my disappointment for the rest of my life as it was my dream to give my contribution to Indian Army but perhaps something else was destined for me.

I did my PG in English from Awadh Degree college Lucknow and got married to an Engineer in 2005. One incident that had completely changed my life was the death of my younger sister Neetu in road accident in 2006-07. At that time I was mother to a beautiful daughter. The sudden demise of my loving sister left certain kind of vacuum in my life and I was completely broken and shattered.

In the meantime my husband was transferred to Agra and I tried to start my life afresh. The sorrow and grief due to passing of my sister somehow inspired me to start writing poetry that gave vent to my suppressed emotions and feeling. The last thing I had  dreamt of becoming in my life, was being a poet but it happened and happened for the better.

I got opportunity to do modelling assignments and later did quite a few short films and documentary films. I also got a chance to act in a Bollywood movie “Wah Taj”. I have also penned down songs for short films based on social issues. One aspect of my personality which was not known to many was to serve the weaker, deprived and ill persons of society, since my childhood

What is your aim and ambition in life?

Soon I got disillusioned from the artificial and materialistic attitude of society and found that acting and modelling were no more attractive for me. Now my focus was shifted to serving the deprived and the poor, as every destitute and helpless person needs shelter, medical help, clothing and food to survive.

Further my aspiration was to make an attempt to eradicate social evil and practices prevalent in society.

Life is full of ups and downs and sometimes you feel so lonely and shattered.

My aim was to serve the weaker section of society and needy and I believe that success and failure is irrelevant and I didn’t had any greed for name, fame etc. I do feel that lack of resources and funds was hampering  my movement and most disheartening is the apathy,and indifferent attitude of society but i never lost my hope and even today I am trying serve the society as much as I can. With the help of my friends, neighbours, acquittances.

I may have won many awards in the field of sports, modelling, writing etc. but happiness on the faces of those whom I served is the biggest achievement in my life. For those who are helpless and don’t have any hope, kindling a ray of hope for life and to make them feel that there is someone who can take care of them is my biggest achievement. People calling me Mother Teresa is also very flattering

If I was not doing social service, I might be serving my country as an army officer or in the field of sport, but I am sure that besides all this I definitely ended up serving the helpless and destitutes of society.

I think my father and my sister had greatly influenced me to be whatever I am today. Writer within me came due to untimely demise of my sister Neetu and my father encouraged at every stage of my life and serving the helpless and needy came from Mother Teresa.

my dream is to provide shelter home to all the helpless and destitute in our society as well as providing emergency medical aid, blood to the injured people in accidents that can save their life. i also wanted to work in the field of organ donation and  so that many lives can be saved by  increasing acceptance of organ donation in our society and making them aware about its benefits.

Also, as a writer I also want to excel in the field of writing and create a niche for myself.