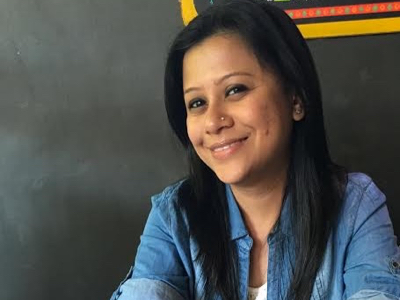 When we were kids, we used to subscribe to a few magazines at home – Target, Tinkle, Amar Chitra Katha, Readers’ Digest and WWF (World Wide Fund for Nature). My elder brother and I would eagerly look forward to the newspaper delivery man on certain days of the month when he would slide in our favourite magazines within the sheets of the newspaper.

Right after school we both would sometimes fight and then of course take turns to read our favourite stories. On every weekend afternoons my father would read out stories to us before our afternoon nap and we had a brilliant time discussing the story and asking a lot of questions to know more about the characters in the plot. This planted the seeds of reading and creative writing into me at a very young age.

Moreover, ever since I was in school my father would keep encouraging me to write something for magazines and dailies, especially where I felt strongly about a cause; and when they would get published, I would be on the top of the world. Nothing was as thrilling than seeing my name appear in a magazine at a time and age when the internet and social media was never heard of – so that was a kind of a big deal.

My dad was very keen that I become a photojournalist because somewhere I think he saw in me the love for writing and capturing the moment through a camera lens. Being an army officer’s daughter, I always wanted to join the armed forces, however I didn’t make it through the selections, but I was happy I at least tried and then came back to take up the stream I loved second best that was writing and photography.

Now 15 years into my career, as a features writer I have written children’s books, worked in e-learning companies, written travelogues and food reviews and I’m still writing a variety of content in a host of areas and for several brands as well.

But ever since I started my writing career I knew there was something more that I wanted to do. Coming from a time where we grew up when career options were still opening up and the presence of the internet and the social media was at its nascent stage – I was still figuring out how and where to begin. But I kept the dream in my head and heart and continued to work; and then after almost 10 years into my writing career I decided to launch my own website – The Lifestyle Portal.

The Lifestyle Portal is my dream project; it is a launchpad where I promote new talents, skills and entrepreneurial ventures. I firmly believe that everyone deserves a chance and a starting point in their careers. There was a time when we would wait for hours for a job interview only to be told that since we had no experience, we didn’t qualify for the post. It would make me think that if no one gave me a chance, how was I ever to get any work experience at all! That remained with me for years; and today five years into the launch of my website, I’m proud to have featured over a 100 entrepreneurs/ start-ups because I wanted to give everyone a chance to at least tell what their story, their dreams and their venture is all about. Whether it works out or not is immaterial, what matters most is that they’ve been given a chance.

Ever since my website has gone live, I’ve been getting a lot of positive responses and feedback from my readers and people who follow The Lifestyle Portal and this encouraged me to take my dreams to the next level. The initiatives for The Lifestyle Portal are that I’m now seeking sponsors and angel investors for a long-term and a mutually beneficial collaboration (both with start-ups and top brands) to help promote them and their initiatives through my website.

One of the biggest challenges that I face especially when I work independently is commercials. Most clients who don’t land up collaborating with The Lifestyle Portal are the ones who feel that ‘anyone can write’ and that the work they want to get done should ideally be done for free or for a substandard rate. I have learnt to consciously disassociate myself with those kind of people who don’t want to pay for any editorial, creative or promotional services through my website. Now even though the work maybe less, but there’s a lot of peace of mind as I’m working on projects I like with people who share the same enthusiasm about work and believe in their dreams just like me.

Personally for me, the very fact that I’ve stood my ground from the time I launched my website is one of the greatest achievements for me. When people said I was silly enough to put in my hard-earned money into something that they perceived frivolous has actually paid off in my life. Today I’m glad they didn’t believe in me, as it just made me work harder to see if I could do it myself. The Lifestyle Portal has opened up new avenues for me, helped me network with a various professionals, travel and explore new cultures and collaborate with top brands and start-ups in the country. I can now foresee The Lifestyle Portal being a big name where brands would want to collaborate and take it one step further ahead.

I would have definitely been working somewhere in the similar field or maybe if I had got through the army, I would have been retired by now but I would have kept writing for sure with some amount of painting, lots of traveling and photography thrown in.

My parents are my biggest inspiration. Since my father was in the army and after his retirement we have seen how beautifully we have sailed through every situation in life together as a family. My father’s hardwork and perseverance and my mom’s strength of standing by him and bringing us up have been the biggest inspiration for me.

Post retirement my father has worked very hard to reach a point in his career where he’s a name to be associated with in his field. My elder brother too has worked his way up in his successful career struggling at first, but he never gave up on his dreams. My cousin brothers who’re first generation entrepreneurs who have also seen their share of hardships but are doing incredibly well and are happy – in short people who don’t give up on their dreams are my inspirations.

I have always believed that there’s no short cut to success, and that one has to work hard no matter what; and the recipe for success however clichéd it may sound is a blend of talent, hardwork, perseverance, the right attitude, spirituality and yes, a bit of luck.

But I must also mention that my other sources of inspiration are from the people I write about which is truly very humbling. Their stories, their struggles and how they have overcome all odds to realise their dreams is something that fuels people like me who’re passionate about their work.

The future looks hopeful and from where I stand, I feel optimistic that I’ll be able to launch The Lifestyle Portal into a successful e-publishing firm someday where I’ll be able to provide employment and give people a chance. I’ve got some ideas for collaborations and I’m hopeful of getting the right kind of angel investors be it start-ups or top brands in the country to be able to take The Lifestyle Portal to the next best level and we become a name to be reckoned with.

Tanya is a graduate in Sociology from Sophia College, Mumbai and a post-graduate in Communications and Media from SNDT Women’s University in Mumbai. She also has a postgraduate diploma in Instructional Designing, from Symbiosis Institute, Pune. Tanya has spent more than 15 years in the field of content writing – where she’s worked on prestigious projects right from Tinkle Comics (India Book House), IL&FS – Education Division where she’s authored, edited, designed and researched on several children’s books for Pratham and has retold classics for Mango from DC Books. Apart from writing for Rediff.com and The Hindu, she’s also been actively involved as a Travel Expert with Yatra.com and has written several travelogues for them. Currently she writes for a UK based publishing house, is a food writer/ reviewer for a popular Mumbai based events website and is the founder of The Lifestyle Portal.