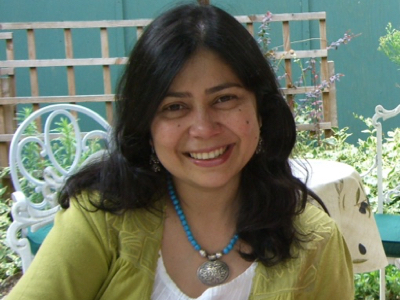 I am a London-based journalist and author of four books. My books include For King and Another Country, Indian Soldiers on the Western Front 1914-18, Victoria & Abdul, The True Story of the Queen’s Closest Confidant, Spy Princess, The Life of Noor Inayat Khan and Curry, The Story of Britain’s Favourite Dish. I am also the founder and chair of the Noor Inayat Khan Memorial Trust.

I have always been passionate about bringing out the hidden stories that emerged from the relationship between India and Britain. I have campaigned for recognition of the contribution of Indian soldiers in both WWI and WWII. I set up the Noor Inayat Khan Memorial Trust and campaigned for a memorial for WWII heroine Noor Inayat Khan in London. This was successfully unveiled by Princess Anne in 2012.

I give talks in schools, universities, museums and galleries about Indo-British history so the next generation is aware of these forgotten stories.

Raising the funds for the Memorial for Noor Inayat Khan was a huge challenge. But I had a good team and we worked flat out to raise awareness about Noor. We lobbied M.Ps, peers, and managed to get the media interested. We organised high-profile fund-raisers and small events so the message went out to everyone. It was a very special day when the memorial was unveiled. Now people can visit Noor and pay their respects to her and her story is not forgotten. Subsequently, Royal Mail published a special stamp in her honour in 2014. I have given talks on Noor at the National Portrait Gallery, Trinity College, Cambridge and various other venues.

Bringing the stories about forgotten people like Noor Inayat Khan and Abdul Karim to a larger world. My latest book brings the stories of India’s First World War heroes to life. The stories are out there now. People have got back to me saying how much it has moved them. That is always the most rewarding part.

I always wanted to study archaeology! Maybe I would be involved in digs and helping find ancient artefacts and civilisations!

My parents. My father always taught me to be independent and self-reliant. He came as a refugee from East Pakistan after the Partition, finished his studies despite economic hardship, built his career and gave me and my sisters the best start in life. He believed firmly in education and women’s rights. My mother taught me to be nurturing and caring. I hope I managed to combine both!

There are more stories to be told. I hope I will be able to tell them. Some of my books have been optioned as films. It will be lovely to sit back and see others create something from my stories and research.

I was born in Calcutta and grew up in Dhaka, Kathmandu and Delhi. I graduated in history from Stephen’s College, Delhi, and completed my Masters from Delhi University. I launched my career in journalism in the bustling offices of the Times of India in Mumbai and Delhi. In 1987 I went to London. I have worked since then for the ABP group as their London correspondent. My interest in history and journalism led me to write my books.