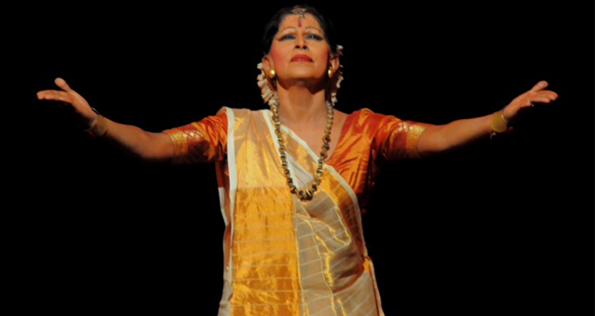 I was extremely lucky to have been born into a family that, despite being traditional, was very forward-looking and gave me the fullest support to be who I am.

My mother’s family were freedom fighters, involved in politics and social work while on father’s side, it was the civil service. My maternal grandfather was a barrister and landlord who was active in the Freedom Movement. He was the first person to be imprisoned in the Independence Movement in Bihar in 1919 and he was also a member of the Central Assembly in 1924 (as the first parliament was then called in the British colonial period). My mother herself was in active social work and politics. My father was a civil servant. I therefore grew up in an atmosphere where Indian philosophy, Hindi and Sanskrit literature, classical music and dance reigned. I also enjoyed an environment which emphasised the importance of education, equal rights for both genders, social sensitivity and social service.

I never saw a closed door or window in my house as I grew up as my mother was immersed in social work. Our home welcomed several stalwarts in the fields of literature, classical performing arts and politics. It was natural for us to imbibe these cultures. Our parents placed equal emphasis on education as well as ensuring that we received a good grounding in Indian philosophy and literature and the classical performing arts.

It was no wonder that I was initiated into Indian philosophy and arts from my earliest years. While verses of the Bhagwadagita and Hindi literature were recited to me from my earliest consciousness, I was initiated into dance at just three years old. To channel my excess energy, and because of our family background, my mother took me to the famous dancer-actress of yester years, Sadhona Bose, who herself was the grand-daughter of the well-known social reformer of Bengal, Shri Keshub Chandra Sen. So young was I that Sadhona ji burst out in surprise when she first saw me, “koler bacha neeye eshcho?” (“You have brought me a babe
in arms?”). However the ‘babe in arms’ soon became her favourite for I was the most devoted student of dance. For me, I had found my life and breath!

However, with my own inclination towards academics combined with my passion for dance, I entered the civil service (IAAS 1976 batch) while I was a recognised professional classical dancer. I superannuated from the civil service after reaching and serving at the top professional rung four years ago. But my dedication and service to Kathak as a performer, Guru, choreographer, researcher, organiser and author continues unabated.

I was extremely lucky to have been born into a family that, despite being traditional, was very forward-looking and gave me the fullest support to be who I am.

Tell us about any current projects you are working on

For me, my breath and my life are steeped in classical dance. Besides performing nationally and internationally, translating my inner emotions, providing reactions through dance productions about the things which I believe in strongly, I am also engaged in teaching and holding workshops. I believe that classical dance, resonates with the fragrance of our culture in all its dimensions, be it literature, philosophy, language or music. These all took birth on our Indian soil and ensure we have our feet firmly on the ground, immersed in our Indian cultural heritage.

Therefore, I do strongly believe that foundations in classical arts help young people today to develop into good human beings who respect rules and regulations and learn to be reasoning individuals. Most of these students will be able to differentiate the chaff from the essence and will become worthy citizens of India and of the globalised world that we live in.

A thought that I usually share with students and parents is that our ancient Indian philosophy has always laid equal emphasis on the arts as well as academics thereby balancing the negative and positive elements within us (call it ‘tandava’ and ‘lasya’ or call it ‘yin’ and ‘yang’ etc). The emphasis has been on ‘balanced development’. The image of the Goddess Saraswati, Goddess of Learning, is with a ‘veena’ in her hands (but not books). I think this imagery itself should make us think.

Life is full of obstacles and imbalances. If this were not so, it would not be called life. Such challenges help us to grow as individuals. But the main factor is how we perceive them. I never allowed adversities to overwhelm me to such an extent that I became a liability to anyone around me.

I had such stage fright before my first performance at aged four that I felt I had turned to stone and the only thing that brought me back to life was the threat of no longer being able to perform Kathak. Then there was the the stage performance at Bombay’s Shanmukhanand Hall without the support of my guru that propelled me to distinguish between performing with the support of an umbilical cord and performing when the cord had been cut. Both were great learning experiences.

Similarly how can I ever forget the moments when I frantically searched for and identified my father’s body after he died in a train accident in 1977. I brought the body back to Delhi after the post mortem was complete and I myself lit the pyre the next morning. As a young girl in her twenties, for a moment I did think that life had come to a standstill. But the next day I was in Mathura giving a performance at the festival while my younger sister took the ashes to Haridwar.

Then again I have endured the hurtful and vicious remarks that always seemed to trail behind me as a result of having two careers and doing well in both. And later when I developed a skin problem and other medical issues.

That is life – testing us at every point and moment!

Life is full of obstacles and imbalances. If this were not so, it would not be called life. Such challenges help us to grow as individuals.

Achievement and success – such words are rather ephemeral and illusionary. Peace of mind and heart is what I have cherished. Success to me means whether I was able to overcome hurdles and challenges well, honestly, sincerely and ethically. it means working with dedication and depth and dealing with adverse situations and remarks without losing my praxis while practicing humanity and sensitivity in its true spirit.

I just cannot think of anything else that I would be doing. I would always be doing what I have done in this life: Kathak and civil service! Why Kathak? Because I think this is a dance form that reflects life beautifully and wholly in its myriad hues.

There has never been one person who can be said to be the most inspirational factor in my life for every person has offered me something unique. My parents however, especially my mother, brought me up to do whatever I believed in, adopting the right and ethical path.

I do not know what the future holds for me. But whatever it is, I pray that I always retain my sense of balance, judiciousness, reasoning, performing all tasks with dedication, determination, hard work, ethically, sensitively and sincerely. I would always like to serve the Almighty with Kathak as my deep offering at his feet.

Shovana Narayan is the celebrated outstanding doyen of Kathak, a name synonymous with Kathak, breathing the spirit and ethos of Indian spirituality, classicism and artistic excellence. For her outstanding, consistent and trend-setting pioneering works in Kathak, she has been awarded the prestigious Padmashri Award by the President of India in 1992 and the Sangeet Natak Akademi award for 1999-2000 in 2001. Recipient of over 30 national and international awards, they include Delhi Govt’s Parishad Samman, Japan’s OISCA Award, Bihar Gaurav Award etc. She has been conferred D.Litt (HC) besides holding two MPhil degrees (Defence & Strategic Studies and in Social Sciences), and a Master’s degree in Physics. She was also shortlisted for the Distinguished Alumni Award, University of Delhi, 1997.

Shovana is multi-faceted and a pioneer. She has left her indelible imprint as a performer, choreographer, Guru, researcher, organiser and author. Her pristine and sparkling performances, while steeped in classicism and tradition, breathe fresh air of artistic innovations and social consciousness. Her performances over the last five decades in several national and international Festivals and before several heads of states and governments have been mesmerising.

Unafraid, charting new paths in infusing traditional vocabulary with modern sensibilities, the intangible aspects of Kathak have been showcased in various pioneering works. Shovana’s social consciousness was visible through one woman soliloquy of Shakuntala. Dance enactments on lives of sages and philosophers in association with the eminent philosopher, the late Prof Ramchandra Gandhi, saw her yet again charter new paths that others followed a decade later. Her portrayal of Alia in the telefilms, Akbar’s Bridge, won her accolades as an extremely sensitive actress.

Author of 14 books and numerous articles including for INTACH, UNESCO and other prestigious organisations, these well-researched publications based on study of epigraphical research are valuable sources of information that have broken down several pre-conceived notions. Her deep research has led to the discovery of eight Kathak villages. Shovana has also made a film on the philosophical aspect of Khajuraho entitled “Dance of the Temples”.

A visiting professor in several universities in India and abroad, Shovana has given several hundreds of lecture demonstrations and motivational workshops all over the world.

As a dedicated guru, Shovana has laid stress on not only imparting correct techniques with keen in-depth knowledge of the shastras, but also on the passing on to her disciples the intangible spirit and ethos of Kathak in the true Guru-Shishya parampara. She has imparted free training to over 50 students of the underprivileged class for the last several decades and her choreography with 600 “specially abled” students in the 6th Abilympics held in 2003 won her international accolades and again showcased her sensitivity and pioneering works.

Another worthy feature is the quiet dignity and demeanour of her works and of her conduct that has made her a role model for millions of girls today who aspire to be like her following in her footsteps of being an outstanding artiste-Guru-choreographer-author-researcher-organiser imbued with sensitivity and humanity, ethics and technical excellence and brilliance: in short an “artiste par excellence” in the true sense.