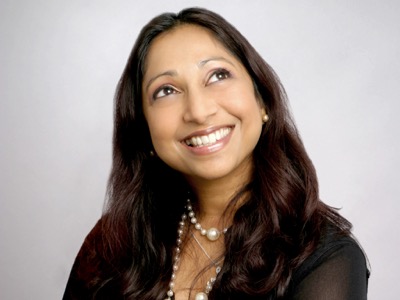 Sangeeta Waldron is founder and CEO of Serendipity PR & Media and an award-winning PR and media professional.

She started her career writing speeches for previous UK Prime Ministers, plus worked at the top level for brands such as the Economist Group; The Times; Mayor of London, Breast Cancer Campaign.

She also writes on sustainable business news and corporate social responsibility; her articles have been published by the UN.

She sits on different boards, including UK Taskforce for Women in Enterprise.

Tell us about yourself, your background and what you do currently.

I have a rich mixed kind of unusual background – I was born in London.

My father was from the Punjab in India and my mother is an Indian South African born in a place small place called Kimberly. My mother’s family were one of the pioneering families in South Africa, part of the ANC and my grand-father had an ice-cream factory! I love that family fact about myself.

My dad came from a well-known family in the Punjab and was a teacher here in the UK. He originally wanted to be a musician and at one point in his life he was a sub-editor on Times of India, that was years and years ago. My mum ran her own business here.

Anyway, because my mum did not speak any Hindi or any other Indian language, my mother tongue is English. When I was 14, my father decided that he wanted to return to India to live, so my mother, my younger brother and I followed him. It was our first time to India and in the first 6 months could only communicate through my dad! Life for me as a 14-year-old girl was challenging; I had to do French as one of my subjects for my board exams as I was too old to learn to read and write Hindi. Everything was so up-side down.

I lived in India for nine years, completing my Masters in 21st English Literature from the mighty, Punjab University in Chandigarh. At 16, my father passed away suddenly and the challenges in India in some ways became tougher.

After finishing University, I told my mum I was leaving home and returned to the UK on my own. I loved being back ‘home’ in the UK and it was now time to start my career.

I wanted to be a copywriter in the advertising world, but a recession was going on and the sector was not recruiting. I sat the Civil Service entrance exam and passed! So, I began my career writing speeches for previous UK Prime Ministers and Ministers and after five years, I quit – as there is just so much creativity you can put in a Minister’s speech!

I kind of fell into the world of PR, but it is a world I thrived in and won a few awards along the way. I have worked at the top level with big, powerful global brands such as the Economist Group (here I was the first Global Communications Director working directly to the CEO); The Times; Mayor of London, Cass Business School; including charities such as Breast Cancer Campaign, the Women’s Institute and Victim Support.

Today, I run my own successful London based PR consultancy, Serendipity PR and Media, which I set up in the midst of the last global economic recession of 2008 and survived. I work across business, arts, culture and books in growth international markets, and my cross-sector approach transcends geographies and cultures.

I also write on sustainable business news and corporate social responsibility where I have had the privilege to interview the Director General of the UN; Cherie Blair (wife of the former PM Tony Blair) and the work of her Foundation; Alastair Campbell and may more high-profile influencers.

I sit on the Federation of Small Business Diversity Taskforce and working to help inspire and support women entrepreneurs who are the backbone of economies everywhere.

Right now I am working on an Indian Expo in London that will be held in November 2018 and is supported by the House of Lords. The aim of the event aim is to promote trade in India for UK companies wanting to do business there and to understand the culture. It’s such a timely event, what with Brexit and we are looking for any Indian companies who would like to be media sponsors for this event or like to put forward speakers.

If I think of Serendipity PR’s success, the biggest challenge since starting my business has been – being a working mother, juggling many balls and competing against the big corporates. But I would like to add that my husband helped me deal with the challenges. He has been a wonderful supporter and enabler – without him, Serendipity PR would not have enjoyed the success it has!

Over two decades in my career there have been many amazing, defining moments, my recent one was speaking alongside the Mayor of London Sadiq Khan about being a woman in business. But I think my biggest, best achievement has been becoming a mum; adding that special title, ‘mum’ to who I am. Rory, our son is my legacy and I am hoping that one day he will help make a positive difference to the planet.

I think I would still be working in the creative world…perhaps doing something in music or film – striving to be a global change agent.

Many people – my maternal grand-father; my son Rory; Julia Hobsbawn, OBE, British writer and speaker on Social Health and modern connectedness and the author of Fully Connected: Social Health in an Age of Overload’; and the renowned business women the late Dame Helen Alexander.

I am hoping the future holds lots of travel adventures; good health for me and my family; and one of my film projects comes to fruition.