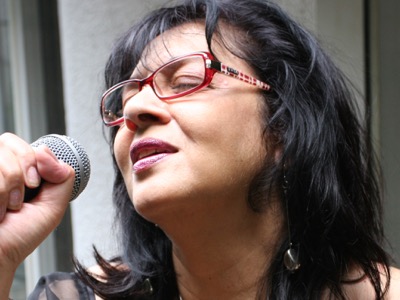 I was born in Tamil Nadu, grew up in Mumbai and Delhi and left for the USA when I was around 20 to pursue my dream of becoming a jazz singer.

I had been selected by an organization called Jazz India, to represent India at jazz festivals in Europe and from there I went to New York. I ended up living there for twenty years, chasing that dream… but had to take up day jobs to keep my body and soul together. Jazz alas, never was, and perhaps never will be the quickest path to fortune.

Some of those day jobs included writing travel brochures; being a tour guide in the South Pacific; organizing trade shows in China; working for an art gallery in New York and running my own boutique on Long Island. That was probably Phase I in my life. I returned to India and began Phase II.

I’ve had three distinct careers: In music, as a writer, and as Executive Vice at Explocity.com, a media company. I worked with razor focus at Explocity for about 20 years, and then decided it was time to refocus on my music, which had been taking a back seat for a while, and also my writing.

Since that decision in around 2012, I’ve released a jazz album with my band called UNK: The Radha Thomas Ensemble. I have toured a lot both in India and abroad, performing my music. Three of my books have also been published. The first one, also in 2012 was called, ‘Men On My Mind’ and the sequel in 2014 called, ‘More Men On My Mind’ were published by Rupa Publications. The third in the sequel will be out in 2017 – I’m hoping.

My newly released book ‘The Cauliflower Diet’ is making the rounds now, and I’ve been busy promoting it between flying to the US to see my son and daughter-in-law.

I’d love it if people went and bought all my books and listened to every song I wrote. But I think that’s a tall ask!

Success? I think being happy is a goal. And spreading that happiness around is very important if one has to maintain the status quo. So for me, being healthy, being busy, being productive and being self-sufficient is a measure of success. I’ve never dreamed of building empires and conquering lands. That’s the kind of thing I like to watch on TV.

Life is always challenging. The day to day tosses up many surprises that you could have never anticipated.

I’d say having a child (I have one son who lives in the USA) was the most exhilarating and rewarding experience of my life. It changed me as a human being and I discovered that I was capable of loving completely and totally, without really expecting anything in return.

It is not an achievement, because, well, I mean…it’s a fairly common thing to have a child. But for me it was definitely a revelation to realise that I would gladly give up my life for someone else… and that feeling just keeps getting stronger. I am so grateful for my son.

Oh, I’ve stopped doing all the things that I don’t like doing. Like editing other people’s copy, mentoring newbies, creating products for other people and so on. These days I’m focussing on the things I like best – singing, writing and playing with my doggie.

Without a doubt it would have to be my mother, and next to her my aunt, her sister. Both strong-willed, fiercely independent and highly capable women who didn’t believe in fear and cowardice but strongly felt that one should have a marvellous time, no matter what. Oh yes, they also taught me the importance of aesthetics.

I wish I could tell you what the future holds for me. I’d be a millionaire then. I haven’t a clue… but I am waiting eagerly for it. Provided it doesn’t hurt too much.

She’s a writer of books: ‘Men On My Mind’ (2012) and ‘More Men on My Mind (2014) published by Rupa, follow a young woman’s quest for good sex. The third in the trilogy will be released in 2017. Her latest book on health and weight loss, ‘The Cauliflower Diet’ was published by Penguin Random House in March 2016.

She’s been around the world as a tour guide, organised trade shows in China, owned a boutique in New York, worked for an art publisher in America, hosted a jazz show on Radio Indigo, produced food guides and written for many publications across India.

Her ‘day job’ for the past 25 years has been as Executive VP & Editor at Explocity, a Bangalore-based media house.

But closest to her heart is music. She’s a jazz singer, composer and band leader, with a global career spanning over 40 years. Her band UNK: The Radha Thomas Ensemble is one of India’s leading jazz combos.

She writes all her own original music and lyrics. Her newest adventure is being part of the Bangalore Poetry Festival. “Songs are poems too,” she says.

Her hobbies are watching cop shows on TV and playing with her dog Brownie. She has one son, Stefan, who lives in New York.