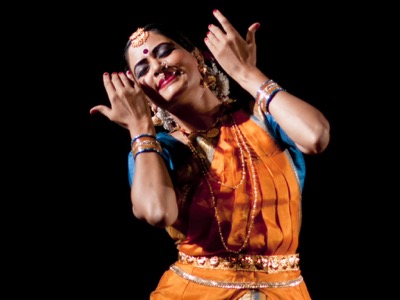 My journey in dance began in, my mother, Amma’s womb.

Guru Kamalini Dutt is a Bharatanatyam Guru-scholar (student of Tanjore Lakshmikantamma and Sikkil Ramaswamy Pillai), who specialised in producing programmes of Classical Dance and Music in Doordarshan for over three decades.

She retired as Director at the Doordarshan Archives. I started learning to walk to the sounds of ta ki ta dhi mi and grew up listening to kritis, varnams, padams, tillanas. As Amma’s engagements with Doordarshan increased she put me under the tutelage of Smt. Radhika Shurajit who followed Kalakshtra bani. I visited Chennai during my school summer holidays to learn from Radhika Akka and went through a three year intensive period of training in Chennai while pursuing Bachelors in English Literature.

After returning to Delhi, Amma wanted me to join a Guru who could train me in the Art of Abhinaya. We went to Guru Swapnasundari. She tested me and agreed to teach me Bharatanatyam. She also insisted that I should undergo the training in Vilasini Natyam- the art of Telugu Devadasis. I was thrilled for having been selected by her. From 2000-2014 I worked under her. My focus shifted to Vilasini Natyam and I started performing that style more. As there are very few performers in this style I got more opportunities to present it in different platforms. Since last year I have also started performing Bharatanatyam regularly.

My father, Kuber Dutt opened up the world of Literature for me. He was a writer, poet, commentator, painter, script-writer, narrator and a supporter of social causes. He also worked for Doordarshan and specialised in making programmes on Literature and other allied arts. Amma did her Masters in Hindi Literature despite being a Tamilian. They both served the cause of art through their life. I am grateful to them for instilling in me a deep liking for literature, philosophy, spiritual studies and psychology. It was my need to understand the connection between art and society that made me do Masters in Sociology from Hyderabad Central University after a gap of eight years since my graduation.

So my childhood was filled with arts, artistes and thinkers. Plus I was brought up in two cultures – South and North – Appa was from Uttar Pradesh and Amma is from Tanjore. But I think I am a product of not just my childhood but several lives and choices. There are many people who are not my direct teachers in arts but have made valuable contributions to who I am as an artiste and as a human being.

Currently I am performing two devadasi art forms – Bharatanatyam and Vilasini Natyam. The latter is not very well known as it was researched and recast in 1990s. It is a distinct dance form with its unique vocabulary and approach to abhinaya. It is not a different school of Bharatanatyam or Kuchipudi. Very few people are performing this dance form. But it has made its own space in the field of dance. Institutions like Sangeet Natak Akademi, Spic Macay, Doordarshan, Indian Council for Cultural Relations (ICCR) – all have recognised the authentic historicity of this art, its aesthetics, its depth and beauty and its spirituality. And they have encouraged it in several ways. Artistes have so warmly enveloped this form. Many senior dancers have included this dance in their festivals and are continuing to give their support. I am committed to both Bharatanatyam and Vilasini Natyam very deeply and am doing my best in spreading its knowledge through performances, workshops and lecture demonstrations.

Dance is a lifetime project. I am learning new pieces, researching on their lyrics, revising the old compositions and connecting with them at deeper levels, reading about dance- the aesthetics of it, its spiritual content, discussions with my Guru, watching other dancers, observing nature, and blanking out for sometime.

Having said that I wish and hope that more and more people watch Vilasini Natyam, which is a rare art form. Guru Swapnasundari learned the Telugu Devadasi art from some of the senior most devadasis of Telugu speaking areas. It was rechristened as Vilasini Natyam in 1995. Slowly it came out of Andhra land. Sangeet Natak Akademi made a detailed documentation of it. Doordarshan made a documentary not only on Vilasini Natyam but also on Ranganatha Swamy temple – the only temple in independent Indian where dance is performed as a ritual every year during the Brahmotsava. SPIC MACAY is taking this art to various educational institutions. And most importantly the artistes are including it in their festivals. I hope that with continued efforts this art will be seen enjoyed and practiced by more and more people.

Well success is not a destination and I really don’t know how to define it in specific terms. Is it number of awards? Performances? Grades? Tours? Reviews? Money? All this is very important as it gives validation for an artiste’s work. One always likes appreciation and accolades. But my biggest challenge which is ongoing is to keep redefining success and finding my space in this world – a space which makes me feel contented with who I am and inspires me to work harder and harder unconditionally. For me performances are very important but more important thing is to make every performance a memorable one. An impression, a deep satisfaction, a smile, a tear that people can carry back home – that is probably success. If someone recalls a past performance, that is success. When a person is so touched by my lecture-demonstration to an extent that her/his perception about classical arts being old/archaic/cerebral, completely changes and s(he ) starts to engage with the arts – that is success.

Awards are very important as every award is a not just a recognition but a belief in one’s work. When I got Dr. MGR award for Bharatanatyam from Music Academy in 1999, Jayadev Puraskar in 2015, and when Sangeet Natak Akademi conferred the Ustad Bismillah Khan Yuva Puraskar in 2008 (both for Vilasini Natyam) it was enthralling. The love, respect, and appreciation gives me the strength to move on. But more challenging is having to live up to the responsibility of that award through whatever I am doing.

I think my biggest challenge is to believe in myself. I am my worst critic and am often bogged down by self-doubt. In this society, which is gripped by forces of commercialization, instant gratification, fear and insecurity, it is a challenge for an artiste to keep the lamp of one’s creativity lit. But I am truly blessed to have a mother and Guru like Kamalini Dutt, spiritual Guru Bharat Nath Dakour and a few close friends in the art world – they all love me unconditionally and this connection helps me face all challenges with strength and grace.

To hear my teachers say ‘I am proud of you’

To get up and dance no matter what….

Travelling and writing travelogues. I love nature. I wish I could go around the world and experience different cultures, talk to people and write about their experiences. Working with NGOs and trying my best to bring smiles on people’s faces.

I also wish to revisit the children magazine ‘Expressions’. I worked with a group of children on various topics like school, cartoons, nature and created three editions of this magazine. The fourth topic was money but due to lack of time we had to put ‘Expressions’ on hold. I wish I could restart the work.

I also wish to spend time with animals as they are so full of joy…unconditional joy.

My mother. She has not only taught me how to dance but how to think dance, how to breathe dance – how to make it a part of one’s own inner growth. Her spiritual inputs help me tremendously to ground myself.
Kathak and Yoga exponent – Nisha Mahajan – who has always nurtured me with lots of care and compassion. She lives her philosophies and is truly inspiring the way she connects to her Art. Many times my life came to a dead end and I broke down in several pieces. She gave me lot of inner strength to hold onto myself.

My soul friend Shilpa Krishna – for being who she is. She is such a brave person handling so much in her life and still smiling back with lot of courage and grit.

All those devadasis who practiced the art form with utmost devotion and love. It is because of them that in this day and age we are able to see such beautiful dance styles.

Nadia – the gymnast, Dashrath Manjhi, Irom Sharmila, Mahashweta Devi, Ruskin Bond and Emperor Ashok. Every person who lives life with depth, conviction, passion and honesty is a source of inspiration for me.

But one day I want to create a space for artistes where they can rehearse, perform, research, discuss
I also want to open a library for children and I want to dance until I die in this body and through my students.

Purvadhanashree was born and brought up in Delhi. She has been practicing Bharatanatyam for over two decades. Purva was initiated in Bharatanatyam at a very tender age by her mother Smt. Kamalini Dutt. She then continued her learning under Guru Radhika Shurajit in Chennai. In 1999 Purvadhanashree performed in Spirit of Youth concert and was declared the best dancer. Consequently she was offered the opening concert in Music Academy the following year. Since then Purva has performed in many major festivals in India – like Khajuraho festival, Natyanjali festival, Soorya festival, Indian International Concert series and has toured South Africa, Mauritius under the aegis of ICCR. Purvadhanashree is a top grade artiste in Doordarshan.