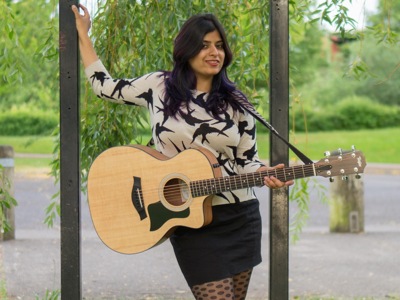 I am an IT engineer by education and I completed a Management in Entrepreneurship program from IIM Bangalore. I worked for three years with Infosys after my graduation and my work took me to Bangalore and USA. My real passion has always been music and connecting with people through music. I was always a part of different bands singing and making music from college and even at Infosys.

I wanted to do something that allowed me to combine my passion for music and social change together and decided to quit my corporate job to explore a new career path. On returning to India, I worked with a dance therapist on exploring the healing powers of music and movement and set up my own organization, Mousai. At Mousai, we facilitate workshops for personal transformation using music and movement as tools. I also worked on forming a band. The goal was to create music that inspires. I released my first album “Journey To The Sun “ in 2012.

Since 2008 to present day, I have been working as a performing musician and facilitator at Mousai. My work involves performing for live audiences, creating music, facilitating transformational workshops and motivational talks. I am also a freelance facilitator and life coach with Pragati Leadership.

I am currently working on a new Kashmiri fusion album with my Delhi-based band FRUZU. The aim of the album is to look at the positive aspects of Kashmiri culture through a musical lens. We plan to crowd fund the album and release it later this year. The songs are more contemporary to connect with the younger generation and re-generate interest in the rich Kashmiri heritage and language.

I am also working on releasing a song and video to highlight the Tibetan fight for justice and freedom. The song called “Burning Fire” has been recorded along with Tibetan singers and shot in Dharamshala along with Tibetan refugees.

Mousai plans to collaborate with a Dubai based happiness coach to offer workshops in Dubai this year.

The biggest challenge has been persevering through failure. Sometimes your own failures or hiccups along your journey can shake your self-belief. When you’re starting out and you’re by yourself, you have to be your own cheerleader and keep reminding yourself of your larger vision and your long-terms goals. You have to remember your successes and let your vision drive you and keep staying positive to overcome it all.

I think more than being nominated for awards for my music or work, the greatest achievement for me has been people coming up to me to tell me that the songs have inspired them or touched them in some way. There is so much negativity in the world today. If there’s anyway I can contribute positively, even if in a small way then to me that’s the greatest achievement as an artist.

There is nothing I can imagine doing other than what I’m doing now. I left my previous job to do what I love fulltime and I am doing just that. I would, however, like to do more workshops than I’m currently doing in addition to my performances and also reach out to larger audiences. Grow bigger.

Every time I think things are getting too overwhelming or life battles are getting too much to handle, I look at Nick Vujicic’s videos and get re-inspired to take on the world. Nick Vujicic was born without arms or legs and didn’t let adversity get in the way of his dreams. He has travelled the world touching people’s lives and is a motivational speaker. When I’m low, his example never fails to remind me of how blessed I am to be given the resources I have, and how to never let anything stop me from my goal. Also, he reminds me to see the positive things and find humour in every situation. One of the famous things he said was, “No arms, no legs, no worries.”

I plan to make a touring production called “Kashmir through a Musical Lens”; an audio-visual show that will give people an entire Kashmir Experience right from the culture to the food and visuals.

The long-term goal is to use music as a means to spread positivity, unite and bring about positive change to at least a million people across the world. I hope to win a Grammy for our country someday.

I would also like to facilitate Mousai workshops across schools and colleges abroad.

A graduate of IIM Bangalore and the founder of Mousai India, Delhi based singer-songwriter Pragnya Wakhlu believes in using her music as a medium for positive change. She released her debut album Journey To the Sun in 2012 and was nominated for the Jack Daniels Rock Awards, Global Indian Music Awards (GIMA ) award & Bite my Music Global Awards for the same.

Since 2008, Pragnya has performed in India & in the U.S.A & Dubai and been featured on VH1, MTV & Zee TV for her work. Her company Mousai was featured in Techstory India and in the book “Inspiring Women to build Innovative Enterprises.”

Her upcoming Kashmiri English fusion album is a project to help highlight the positive aspects of the Kashmiri language and culture through song.

Through her work and music Pragnya hopes to spread the message of love, positivity and unity across the world.