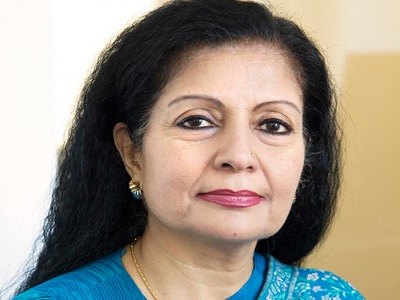 Tell us about yourself, your background and what you do currently.

My father Balkrishna Murdeshwar was a feminist father – a man with a vision and an idealist – ahead of his times, as was my mother Malati – a fierce feminist! They were role models to me in breaking the conventional social mold and gender stereotypes. Malati’s exhortation that always rings in my ears even today is: “Don’t ever be told you are weak or vulnerable because you are a woman. Women are the strongest creatures God made! Be forever strong. You can’t defy your nature!”

My mother and her sister escaped child marriage and were among the first postgraduates in Maharashtra.  They both married men of their choice, outside their communities amid much resistance, showing others the way. Another big influence and mentor growing up was my sister Indira Bhargava who became the Chairman of the Board of Direct Taxes in India. My parents brought me up to seek “self-realization” and assert my human right to express myself, to have a voice, to choose and to lead in my personal, professional and spiritual life – which to my mind is the essence of the realization of human rights, gender equality and women’s empowerment. “Be someone in your own right,” they would say.

I joined the Indian Foreign Service at 21, and it provided an enabling environment where I flourished professionally and had postings in Japan, Sri Lanka, Geneva, Hungary, and Delhi among others traveling the world. I met and married Hardeep Puri, a fellow Foreign Service officer and now have two daughters.

I was involved in both bilateral and UN-related multilateral diplomacy during my 28 years in the Foreign Service. I’ve been part of the A team in the lead up to the Indo-Sri Lanka Peace Agreement, been the key official for relationship building with Japan, Korea and Pakistan during a very formative period. I also shaped India’s multilateral diplomacy, including India’s Look East policy to forge stronger partnerships with the ASEAN and East Asian countries, Indian Ocean Rim Association, BIMSTEC G 15, NAM, Commonwealth, SAARC, OECD, APEC and other multilateral formations that enhanced India’s regional and inter-regional reach and influence. I was posted twice at the Permanent Mission of India to the United Nations in Geneva and had the privilege of representing India in different roles in the 23 or more agencies based there, most notably the Human Rights Commission, the WIPO, ILO, WHO, UNHCR, and UNCTAD. My last post in the Indian Foreign Service was as Ambassador in Hungary with concurrent accreditation to Bosnia Herzegovina.

I joined the UN 14 years ago first as Director of the flagship Division of Trade in Goods, Services and Commodities of UNCTAD and then as Acting Deputy Secretary-General. Thereafter, as Director of the agency that leads on supporting the cause of Least Developed, Small Island and Landlocked countries. And then came the most precious part of my mission in the UN – when I joined the leadership team of Michele Bachelet, the former and now current President of Chile – as Assistant Secretary-General at the newly created global organization for promotion of gender equality and the empowerment of women and women’s rights globally – UN Women.

I am privileged to have led this entity since its inception for nearly six years. I built it from the ground up, secured historic gains in international norms and standards and political commitment to the women’s rights agenda, in advocacy including through our path breaking campaigns, in UN system coordination and in fostering partnerships with civil society and private sector.

Today gender equality and the empowerment of women, which is otherwise such a politically and culturally contested cause, has become recognized as one of the most important enablers and beneficiaries of sustainable development, peace and security, climate change and humanitarian action at all levels – global, regional, national and local.

One project we are all invested in and must all whole-heartedly support, implement and achieve is the gender-responsive realization of the 2030 Agenda for Sustainable Development.

This is a blueprint for our local, national, regional and global development over the next fourteen years,  which places emphasis on gender equality and the empowerment of women as a central objective of the agenda and as a target within many of it’s 17 sustainable development goals (SDGs). This fact is as important as the stand-alone goal to “achieve gender equality and empower all women and girls” – SDG 5, as the links among the SDGs is a crucial element to understanding and making these goals real in the lives of people the world over.

The 2030 Agenda is explicit recognition that achievement of gender equality and women’s empowerment is not only as a sustainable development goal, but as ‘a crucial contribution to progress across all the Goals and targets’ in order to realize the Agenda’s objectives of people, planet and prosperity for all.

The placement of gender equality as a central tenet of the 2030 Agenda is transformative and moves the mainstreaming of gender from a seemingly impossible objective of our lifetime into a “mission possible” to quote our Executive Director, Phumzile Mlambo-Ngcuka.  Gender inequality now has a deadline of 2030.  However, getting to that deadline and reaching our objectives within the timeframe set requires great thought, planning and decisive action on all our parts.  The localization of the 2030 Agenda by national and local governments plays a critical role in how the SDGs are fulfilled. The sixtieth session of the Commission on the Status of Women (CSW 60) in March of this year, provided in the Agreed Conclusions a roadmap for gender-responsive implementation of the 2030 Agenda with a vector of ten “I”s which are as follows.

Inspiration from the intergovernmental normative frameworks and human rights convention. Gender equality is at the heart of the 2030 Agenda and it demands that all SDGs —not just the 11 SDGs that have gender-sensitive targets —must deliver for women and girls and make full use of and bring out their full potential. Political will must be kept alive. In all international agendas and their regional, national and local implementation, —be it migration, climate change, sustainable urban development, peace and security, humanitarian action—, in every situation and in every context, SDG 5 should be a reference point.

Implementation – An enabling environment and governance are Key. At the national level, this means ensuring that gender equality is a top priority in decision-making about national strategies, budgets and policies to implement the SDGs and that women are at the table to effectively influence decisions. The adoption and reform of laws, policies and measures including special measures and actions, the removal of discriminatory laws and policies, are critical to ensuring their full, effective and accelerated implementation of the gender equality compact of the SDGs.

Institutions – Creating, empowering, strengthening and resourcing gender equality and women’s empowerment institutions at all levels – global, regional, national and local – and ensuring that all key institutions – political, economic, judicial, social, cultural, public services, etc. – work in a gender-responsive manner.  Gender equality machineries, that are most often under-resourced and lack authority, need to be strengthened and supported to influence implementation across all policy areas.

Information – generating comprehensive gender equality and women’s empowerment related value chain of data, statistics, indicators, monitoring systems, frameworks, and capacities in SDG implementation, follow-up and review at all levels to assess progress and gaps and guide policies and actions. There are 50 indicators on gender equality and women’s empowerment in the Global Indicators Framework on SDGs which require a gender statistics revolution and support.

Inclusion of all key stakeholders, particularly civil society, women’s movements, youth, men and boys, faith-based organizations and the private sector for movement building, transforming social norms and addressing the needs of all women and girls especially those facing multiple and intersecting forms of discrimination and marginalization. Not only must the implementation of the 2030 Agenda ensure that no woman or girl is left behind, it must mean that the poorest and most vulnerable groups of women – for example disabled and indigenous women and girls, move forward.

Investment – significantly increased and enhanced financial investment and resource mobilization from all sources, including ODA, to close gender equality gaps at all levels – targeted and mainstreamed, transformative actions for financing gender equality and women’s empowerment as committed to in the 2030 Agenda for Sustainable Development and the Addis Ababa Action Agenda.

Integration of gender equality and women’s empowerment across all SDGs and the entire 2030 Agenda and systematic mainstreaming in the implementation of its three dimensions, an all-of-government approach including in development assistance activities and initiatives.

Indivisibility – The prioritization of SDG 5 and gender-sensitive targets threaded across all SDGs in their implementation is a key task for all governments and will have a force multiplier effect on the achievement of all SDGs. Structures will need to be in place to ensure that all parts of government address gender equality concerns in their planning, decision-making, policy action and budgeting. This means stepping up coordination between gender equality ministries and other ministries – health, education, finance, environment and justice, for example.

Innovation – driving political, economic and social innovation that is gender responsive through deployment of science, technology and innovation, modalities and means of implementation, information and communications technology (ICT), and media, including social media, innovative partnerships and advocacy platforms is a priority.

Impact – these commitments must lead to actual change in the enabling environment and make systemic and substantive impact on the situation of all women and girls, especially those most marginalized and must be the benchmark for accountability.

The all-encompassing nature of the 2030 Agenda requires us all to contribute to the achievement of these life-altering objectives.  The involvement of women and men, girls and boys takes us beyond imposed barriers of thinking and action, to reshape ourselves and our world into the equitable and just, environmentally balanced and sustainably developed landscape where no one is left behind.

I have encountered many challenges in different stages of my life and career. However, life is a constant struggle not only to keep pace with the ordinary, but to try and achieve the extraordinary and outpace one-self all the time.  And keep faith through it all.

My greatest achievement personally is to be blessed with the most wonderful family and nurturing those most important bonds of love, affection, mutual support and validation.

I would be a medical doctor – I almost became one, but was channeled into a career in diplomacy instead.

As I was growing up, apart from my parents and sister Indira, I was deeply inspired by Mahatma Gandhi, Pandit Nehru, Swami Vivekananda, Sarojini Naidu, and Indira Gandhi. My husband, friend, philosopher and guide, and most of all soulmate of 41 years Hardeep and my two accomplished daughters and “strong women” – inheritors and carriers of my mother’s feminist tradition are my continuing inspiration.

That is a mystery, the revelation of which I plan and work for today and every day!