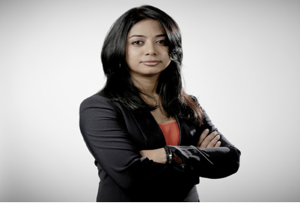 10 years ago, I walked into the CNBC TV18 newsroom as a journalism post-graduate hoping to, idealistically, change the world. I began covering the insurance and mutual fund sectors as a reporter and soon found my calling.

I realised that the average Indian investor needed a voice that would bridge the gap between the manufacturers of investment products and the consumer. Someone who could break it down, simplify it and put it in context for those of us who are too busy to give our investments more than half an hour a week.

I have over the last decade worked towards becoming that very voice. I use several communications mediums to reach out to the investor; my television shows on ET NOW, weekly radio appearances on Radio One Mumbai, articles in the Times of India, Economic Times and Femina, Twitter, Facebook and my blog.

My primary focus over the last few years has been Indian women investors. I realised that we have spent centuries telling women they could not manage any money, let alone their own, and now even though most women are earning their own money alongside men in all walks of life, they are often terrified of managing their own money.

Research shows us that Indian women are more practical and pragmatic and hence more successful investors than their male counterpart. I believe it just takes a small nudge to convince women to start investing. The independence and empowerment that comes with controlling the money is all too obvious. That’s what I do. I nudge.

Tell us about any current projects you are working on

I currently run three weekly shows on ETNow – Investor’s Guide, All About Stocks and The Property Guide – all three shows along with other initiatives run with partners like the BSE and UTI are aimed at investor education with a keen focus on women investors.

I also conduct sessions for investors on personal finance, money management and goal based investments.

I would have liked to work with food some how. I find the act of feeding people very fulfilling.

I’ve had many opportunities to interact with Shikha Sharma, CMD of Axis Bank. She is the kind of woman who makes us all believe that anything is possible and all things are achievable if we put our minds to it.

I’m currently working on a book with Harper Collins which will be a money management guide for Indian women. The book is likely to be out next year

Faye D’Souza is the anchor and editor of personal finance at ET NOW (a subsidiary of Bennett and Coleman India Pvt Ltd), where she spends her days producing and anchoring various television shows on money, investments, investor rights, stocks and real estate.

She is the editor and anchor of ‘Investor’s Guide’ – India’s longest-running personal finance show and one of the most watched shows on business television in India. Faye’s ability to break down complex investment concepts and jargon sets her apart from the rest of the industry and makes her uniquely qualified to communicate with the Indian investor.

Faye is particularly passionate about the Indian woman’s relationship with money and the investment options available to her. Her work in this area has been published by The Economic Times, The Times of India and Femina. She also dedicates time as a pro-bono inspirational speaker for working women on money management.

Faye has a decade of experience covering business news and policy in India. She began her career with CNBC TV18 covering state policy, economic offences and personal finance in Mumbai, Delhi, Andhra Pradesh and Karnataka. Faye has a Bachelor’s Degree in Journalism and English Literature and a Master’s Degree in Mass Communication.