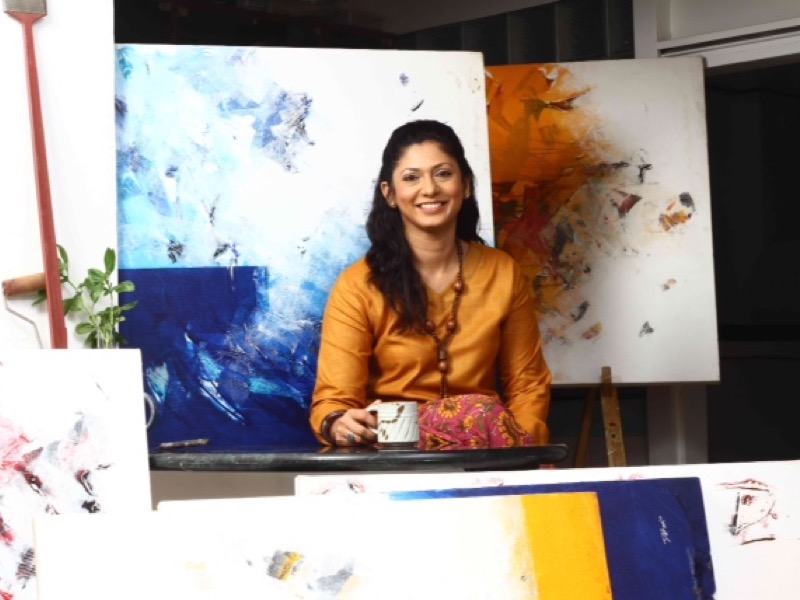 I am a Mumbai based visual artist, working in mixed media.

I was born in Mumbai in a suburb called Bandra, which is where I grew up.

I did my MFA (Masters in Fine art) from Sir JJ School of Fine Art. I pursued my art form further with a diploma in Ceramic and Pottery at Sophia Polytechnic, a scholarship at the Arts Student’s League of New York and an artist’s residency at Taktprojectruam in Berlin. My latest residency was in Venice in 2015 at the Venice Biennale.

Dance has been a large part of my learning and growth. I have trained in Indian classical dance for twelve years in Bharatnatyam and two years of Mohiniattam.

I have had six solo shows and several group shows in Mumbai, Delhi, Pune, Chennai, New York and Berlin.

I have another upcoming solo show in New York in 2016 and recently had a solo show in Delhi at the Turkish embassy. Subsequently, this moved to the gallery, Art Positive and is on till 30th December 2015.

I have also received a patent for a technique – ‘Image that changes with light.’ This technique was used in the 2011 solo show called ‘The Third Dimension’ and has since been used once again in the solo show in Delhi, ‘Ode to the Bosphorus: Glimpses of Istanbul through Yantras.’

I have participated in some prestigious auctions such as the Pink filly- for Cancer awareness, palette by the Edelweiss foundation and the Pfizer foundation.

I was also invited to participate in the Kala Ghoda art festival for the public art installation segment in 2011 and 2012, as well as the BBC functional art show in 2013.

One of my works from the series The Third Dimension has been recently acquired by GVK and will be a part of the art pavillion at the Bangalore International airport.

The first permanent kinetic energy installation in India- ‘Earth Recycled’ was executed by me for Lodha builders at Palava city in Mumbai in 2014.

I am deeply interested in projects related to energy and energy forms.

I wish to promote the silent revolution of human emancipation and growth, of well-being at all levels through Yoga and meditation. I am deeply influenced by Sadhguru Jaggi Vasudev. I have been his disciple for the last nine years and was drawn to him for his approach to yogic science as a technology for human well-being and growth.

My biggest challenge has been overcoming my several fears and learning to believe in myself and to surrender my ego.

Personally I would say it is about being able to liberate myself and live life completely on my own terms with sincerity, integrity and honesty. Although I am still work in progress!

I would be in public service and administration. I wish to contribute more directly to bettering human lives

I would like to watch with curious wonder rather than prophesise.

But I am looking forward to travelling all over the world. To wander and to wonder. Travelling and creating bring meaning to my life.

I have lived in some of the most exciting cities and places of the world and there is still a long way to go with my wanderlust.

I have always had a fascination for energy and attraction to light.

As visual experiences go, which have remained etched on my mind, they have always been connected with different kinds of light. Even the absence of light, is an experience in itself.

I had moved away and gone beyond the form during my student days. That having set the tone for my journey, I have pursued since then, my search for the formless.

I resumed my journey as a painter ten years ago, before which I had been a product designer for eleven years after finishing my MFA from Sir J.J School of Fine Art, Mumbai.

Initially I found myself, for quite sometime, exploring colour, form and textures. Somewhere down the path, the need to introduce the element of light became a strong and an urgent need.

Meditation became quite central and vital to living. As I found myself going into deeper and in longer states of meditation, my work started talking to me more and it probably must have said “Give me light.”

Beyond a certain point, when the mind stills, I actually get a sense that I can see the universe inside me. Brilliant strokes of light formations, ever-changing and never reaching a definite form. Forming, transforming and reforming before I can even capture them!

Delightful and in a way quite raw! Part manifested, part un-manifested.

The vulnerability, the innocence, the feeling of being out of control, this rawness is of greatest value to me.

Light for me is one of the manifestations of energy or “Shakti”, the primordial cosmic energy that represents the dynamic forces that are thought to move through the entire universe.

Having been a Bharatnatyam and Mohiniattam dancer (Indian classical dance forms) for fifteen years, as well a yoga practitioner for the last nine years, the integration of these esoteric elements is germane to my work.

In the last three years my work has moved towards integrating the element of light, starting with metallic paints to embedding Swarovski crystals to finally lighting the canvas internally. This resulted in a solo show in 2011, at Gallery Art&Soul, Mumbai.

“The Third Dimension….. is a show with a unique concept, wherein the images change on the same surface. The viewer can experience three variations within the same painting, which have been created by the use of light.”

I can eternally play with light and light sources but therein lies the challenge for a post-object artist: how can one create something powerful enough to engage and move viewers without resorting to entertainment?

On my recent art residency scholarship in Berlin, extended travel through Europe and visits to most of the museums, as well as my thirst for a historical perspective, I was drawn back more to my core as an Indian.

Yantras and symbols which I have grown up with and which were embedded in my subconscious, started emerging in my work which manifested itself in a new body and I exhibited these in two shows in Berlin.

I have been working on two different bodies of work since my return a year ago.

Ode to Bosphorus: Glimpses of Istanbul through Yantras, explores the unity in two old cultures and civilizations through sacred geometry.

Glow – An abstract body of works using gold foil in layers to create a sensation of time and space as it manifests in music.

This article is accredited to Ashish Bhardwaj.