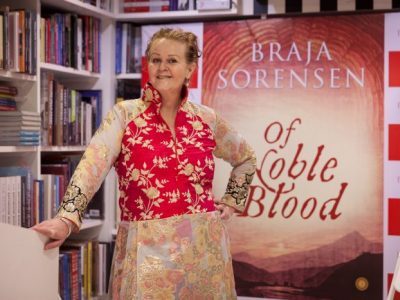 I’m an Australian writer and author who moved to India in the 90s, and have lived here since. I live on the banks of the Ganga in West Bengal in a peaceful rural village; it’s a beautiful way to live, and I wouldn’t trade it for the world. My first book, “Lost & Found in India,” (Hay House & Torchlight Publishing, 2012) starts off with the head-on collision my husband and I had with a 30 tonne Tata truck on the way to the airport…a collision that changed our lives, made India our home, and gave me the life I have now, which is just writing and being at home—a great fortune. It also nearly killed us, caused a massive amount of pain and adjustment, but still I wouldn’t have it any other way. People expected that we’d leave India after that: we’d lived here 8 yrs and were wondering if it was really our home, or whether it was just a phase we were going through. That was almost ten years ago. I think that says it all : )

I have published 7 books, and currently am working on my 8th which is due basically TOMORROW : ) Before coming to India, I had visited several times and loved this part of the country. My husband is Danish, and he’d worked in Sweden at a publishing house, doing translation. I worked in Australia – my last project was for the Sydney Olympics in 2000, where I was the Project Manager for traffic control: millions of visitors pouring into the city, and we controlled the traffic from an office in the corporate sector of North Sydney: the Chairman of the Olympics said it was the best traffic control an Olympics had seen! : )

I was just in Mumbai for the launch of my new novel, “Of Noble Blood,” with Jaico Publishers. And my new project/initiative is WATC : ) I’d love to be involved with women’s groups in India. I write specifically about the culture and philosophy of India’s heritage, it’s current version, and how it might look for the future. Young Indians are in a unique situation in terms of their cultural backgrounds and what the future holds: I love discussing the sociological impact of being “armed” with a strong philosophical/shastric/cultural approach to everything…Indians have more to work with than I think any other nation. I’d love to be involved with events and talks with younger women to encourage them in their field, to give them any help they want or need in moving forward and establishing themselves, and defining what that means. “Success” doesn’t mean fame, money, and legions of fans. It would surprise a lot of women to know they’re ALREADY successful…

Possibly being taken seriously by Indians : ) It’s a bit “rude” for a westerner to speak of India’s heritage and culture and so on; but I’m not claiming to be “the expert.” I have read and studied every aspect of it for 25 yrs, and I read works by Shobhaa De, for example, and see the same concerns expressed about the growth, development, and future of India.

I doubt I could answer that question: I would be doing this, because this is what I’m meant to do…there’s no “other”…not sure. Perhaps living in Australia and working and wishing I’d moved to India back in the 90’s when I had the chance!

I would say Bhaktivedanta Swami; he is the founder of the Hare Krishna movement and made it a household word in the west; he’s the reason a lot of foreigners come to India. The way he has presented the spiritual philosophies and the cultural heritage of India is wonderful, and I can’t for the life of me figure out why there are statues of Gandhi everywhere but none of this man, who did ultimately far, far more than Gandhi ever did. Yes, that’s a controversial statement : ) But what other kind is there?!

This coming year will be filled with events promoting Of Noble Blood, and later in the year a new book released on yoga in the Gita…a daily guide book to understand how yoga actually works: and it’s not just on a mat in a studio. It’s a practical guide to actually applying the yoga philosophy in life…it’s short, to the point, has easy guide steps, and will be published by Hatchette India in November…

Sure, see below: but please include the “seven books published” as a link, as I have done, as it goes to my Amazon Author page and lists all the books there. Thank you!

Braja Sorensen (b. 1963) is an Australian author who first settled in India in the ‘90s, and for twenty years has lived on the banks of the Ganges in rural Mayapur, West Bengal. Prior to that, she worked in television as a copywriter in Australia (Channel Seven, Channel Ten, and Golden West Network), and in the US was General Manager for Mandala Publishing in San Rafael, California. Besides having seven books published and writing for Harmony Magazine, Complete WellBeing in India, and several international magazines over the past fifteen years, Braja’s main work is writing, co-writing, and editing works in the Vaishnava genre. She has studied sociology and her interest lies in the principled and philosophical framework of society and the sociological, emotional, physical, and spiritual impact that such foundations have on communities and individuals. Of Noble Blood is an historical / philosophy-based fiction that incorporates such principles, which are taken straight from India’s own historical and philosophical teachings.

Main one is Facebook, where anyone can find me at https://www.facebook.com/Braja.Sorensen . I also have a website which I need to fire up again, so here it is:  www.brajasorensen.com