Inspirational Woman: Anuradha Sawhney | Founder of Back to the Basics, Author of The Vegan Kitchen: Bollywood Style! 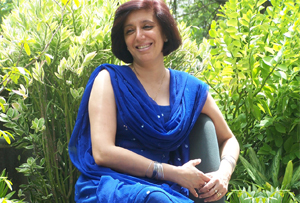 I am the author of one of the first books for the growing vegan population of India, ‘The Vegan Kitchen: Bollywood Style!’ which brings together recipes from no less than 50 leading names from the world of Bollywood, fashion and music.

The book has forewords from two internationally-renowned doctors and a leading fitness expert who explain how a nutritious vegan diet can help reverse heart disease, manage diabetes and reduce obesity, as well as promote fitness!

Tell us about any current projects you are involved in

I now run a vegan food service in Pune called Back to the Basics through which I teach people how to take back control of their lives using the right food. We run a healthy food service which only uses whole-grain plant-based ingredients.

They refuse to acknowledge that animals are sentient beings as capable of feeling pain, loving their families and wanting to be with their friends just like you and me.

The fact that people still consider animals an inferior species. They refuse to acknowledge that animals are sentient beings as capable of feeling pain, loving their families and wanting to be with their friends just like you and me.

All the victories that I could achieve for animals have been a big victory for me. My team and I were instrumental in closing down some zoos, improving the condition of animals in others, rescuing lions and tigers from circuses, banning the entry of elephants into cities, introducing humane education programs into schools, making people rethink cruelty to animals and streamlining laws relating to the use of animals in zoos, circuses and in the film industry.

All the victories that I could achieve for animals have been a big victory for me.

I really can’t imagine what I would be doing if I wasn’t doing what I have done till now! I often try and imagine but my mind is a blank. The years before I worked only for animals are a blur. I don’t know how I was working in a leather buying house! To think I was not aware of the cruelty behind leather shocks me even now, and yet makes me realise how hidden that cruelty is. The leather industry insists on saying that leather is a by-product of the meat industry whereas the truth is actually the other way around.

Well, my mother is a very strong woman, and I guess I get my strength from her and also the focus to achieve what I set out to do.

Now that’s a question I can’t answer, and honestly I don’t want to either. I like surprises, as long as they are pleasant ones. I only wish that in my life time, either all animals revolt against humans because of the cruelty being inflicted on them in every sphere (a la Animal Farm by George Orwell) or that people stop torturing defenceless creatures. Live your life and leave them be so they can live their own lives.

Throughout her career, which included heading the PETA India office for nine years, Anuradha Sawhney has been an active campaigner for animal rights and environmental issues. She has won many awards for her work, and Femina magazine ranked her amongst their 50 most powerful women in India. She has often appeared on national and international television debating the rights of animals and has been profiled in almost every major publication. She is considered the foremost authority on animal rights issues in India.

An episode of lifestyle-induced high cholesterol, triglycerides, hypertension and high sugar levels scared Anuradha. Her doctors wanted to place her on immediate medication. Preferring to avoid medication, she searched for alternatives to cure the conditions. Anuradha’s determination and single-minded belief that the mind can conquer the body changed the shape of her life and led to her current book. She now has a wellness center, Back to the Basics, via which she teaches people to take back control of their lives using nutrition. People flock to her for her non-dairy feta cheese and vegan cheesecakes! Anuradha is an avid health enthusiast and firm believer in the power of a vegan lifestyle.