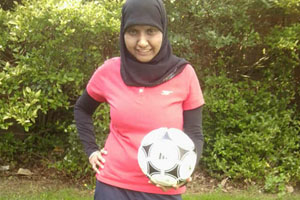 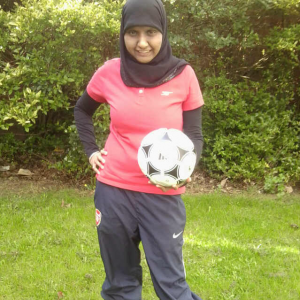 I come from a traditional Pakistani Muslim background. I studied BA Hons English Literature at Northampton University and went on to study an MA in Community Development & Youth Work Studies at Durham University. I have since obtained my Masters.

What is your sporting background?

I haven’t got any specific sporting background, unless you count playing football in the back garden or down at the local park with my two older brothers. Football has been and still is a huge part of my life since I was a young girl. I’m not sure why but as soon as the ball touches my sole/soul something magical happens and my heart becomes alive.

What have been your biggest achievements as an athlete?

There have been some achievements in my coaching career, including coaching Under Elevens at LCFC Girls Centre of Excellence, working towards my UEFA B License and winning the Asian Women Achievement 2015 awards in the sports category.

Even though these may seem like big achievements, I feel like I haven’t achieved anything yet as there is still a long way to go until I achieve all that I have set out to achieve. Until then, I will continue to eat, breathe, sleep and coach football 25 hours a day, eight days a week!

Can you pin point any key milestones or significant memories in your sporting career?

There have been several memories throughout my coaching career, but the four key milestones which are very significant and personal to me are;

1. When I initially started out, my first ever coaching role was whilst I was studying for my Masters. I had to do a placement at North Benwell Youth Project in Newcastle. The project manager knew I loved coaching and he assigned me to coach a group of 40 young men aged between 16-24 for the next 12 weeks. It felt like I was literally thrown in the deepest end of the ocean with no arm bands or boat to keep me afloat. Just imagine a 5ft 2 inch woman, who was Asian Muslim and wore a headscarf walking onto the pitch with a bag full of footballs, introducing herself to the lads as their new coach for the next 12 weeks.

One thing I forgot to mention that this was after the tragic events of 9/11 and 7/7 therefore people’s perception of Muslims was very negative and hostile. During the first few weeks the lads tested me as a coach by tackling me very aggressively which left me with bruises on my legs, sore ribs from elbowing me and I’ve forgotten the number of times I spent on the floor. Despite all this I came back each week more determined and stronger to get the lads to accept me as a coach, which they did and since then they have regarded me as a coach.

2. While I was a Sunday league manager (out of 400 manager s I was the only female manager) I experienced some vile racism and sexist abuse from opposition managers. I recall one experience, in which the opposition manager not only refused to shake my hand before and after the game but throughout the game he kept making sly comments about me. After I left the game, I parked my car and started to cry, not due to the impact his words had on me but rather his refusal to shake my hand. I was very upset about this as it felt like I wasn’t accepted in the game. Sadly this resulted in me stepping down and quitting being a manager as I didn’t want this experience to poison my love for the game.

3. Three years ago at the Black Asian Coaches Association (BACA) event, I met a gentleman who, without him I wouldn’t have achieved as much as I have. His name is Wallace Hermitt and he is the co-founder of BACA. When we initially spoke, me being me, I just spoke about my passion for coaching and the mostly negative experiences I was enduring while trying to find my big break in the footballing world. I explained I was finding it very difficult to accept that national and local organisations were not taking my passion seriously. Wallace immediately saw my passion shine and my hunger to achieve my dreams, so he offered to be my mentor and I immediately agreed. He was the first person that didn’t need me to convince him and more importantly, he saw the potential in me before I did. It’s been three years since Wallace became my mentor and without his support, everything to date I have achieved would still be a dream and if truth be told, I would have hung up my football boots and locked away my coaching books a long time ago.

4. Two months ago, I was invited by Chris Ramsey, Queens Park Ranger (QPR) manager, to come down to their stadium and deliver my UEFA B final assessment as a practise run to help with my confidence. When I arrived at the club training ground, I was informed by Simon Ireland (QPR Youth Development Head Coach) that I would be coaching the Under 18s and some players from the Under 21s. I lack confidence in my coaching so when I was told I would be coaching these elite players, some who play for QPR’s first team, whilst setting up my pitch, my nerves kicked in. This could only mean one thing – I would suffer from stage fright which happened to me a lot and the 25 minutes I had with them started to feel like 25 hours! To my surprise, when the players came out, I called them in and briefed them on the session aims and objectives and I told them to get into position. I never felt so alive! I was Coach Annie, who I love, as she was very confident about stopping play to coach individuals or to give them coaching points and she was assertive when players were not doing what they should. Before I knew it the 25 minutes was sadly up and I had achieved coaching elite players at a professional club! What was more important was that the players gave great feedback about my coaching skills: they said I was confident, I knew what I was saying and that I knew the game.

I was then informed by Simon that Chris Ramsey would like me to observe him coach the first team! Oh gosh that day couldn’t have got any better! Not only did I coach elite men with confidence but I observed one of the country’s best coaches in action. This experience was very significant to me as it made me realise that not only can I coach but I can coach elite players in the professional game. It was this moment, after 8 years of coaching, that I started to believe in myself as a coach.

if I can inspire other girls and young women by just being me then that’s an honour to have.

Do you consider yourself to be a Role Model?

I don’t really see myself as a role model as I have yet to achieve what I set out to achieve. However if I can inspire other girls and young women by just being me then that’s an honour to have.

Have there been key figures that have influenced and/or inspired you?

There are a few key people who have inspired me including Hope Powell, Chris Ramsey, Chris Houghton, Terry Connor, Chris Powell and Jimmy Ffloyd Hasselbaink. These are all great managers and key figures in the football world who all come from BAME communities. These great legends have experienced their fair share of racial abuse, sexist taunts and constant rejection, however their achievement and success have helped loosen the door hinges for someone like me to continue working hard, just like they did and not to give up. They have helped the open the door open for the next generation of male and female coaches from within the BAME communities to pass through with ease and not experience what we had to go through, or in my case am still going through.

What are you doing now?

At present I am constantly working hard to achieve my UEFA B, whilst coaching U11s at LCFC Centre of Excellence

​How has sport influenced other aspects of your life?

My moto is ‘Anything you want to learn about life, you can learn through football’.

Between the two worlds they need to continue to work together on equality in the workforce and the importance of not being afraid of change. Being an Asian Muslim Female who wears Hijab, I have had people tell me that no professional club or the sport itself would employ me as their coach as I don’t fit the right image/brand. So as the world of business continues to change with the times, this is something the world of football can learn from, so it mirrors the world of business because in reality they both need each other to read from the same page and from the same book to survive!

What have been the three most significant areas of personal development that you have gained through your sporting career?

​If you could go back in time would you do anything differently?

Yes, I would tell myself that it is ok to be Annie.

What advice would you give to someone who wants to be successful in any industry?

Don’t allow other people’s barriers to become your barriers and prevent you from achieving your dreams. If I allowed people who said I shouldn’t or couldn’t become a coach because I was a FEMALE, or because I was ASIAN, or for the fact I was Muslim, or even because I wore a Hijab, I wouldn’t be coaching elite girls at a professional premiership club or having the likes of Chris Ramsey and Les Ferdinand supporting my coaching development.