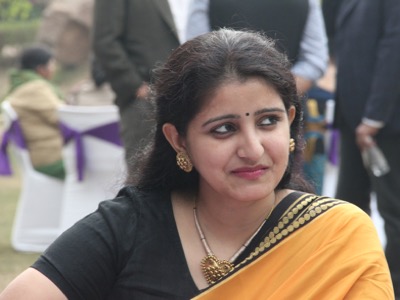 Writer-poet Ankita Anand is a co-founder of the street theatre group Aatish.

In the past, she has been secretary, National Campaign for People’s Right to Information; copy editor, Penguin Books India; coordinator, IHC Indian Languages’ Festival; and member, People’s Union for Democratic Rights. She is also a part of Genderventions, a theatre project to make public spaces more accessible for women.She is a recipient of the European Commission’s Lorenzo Natali Media Prize for outstanding reporting on development and a fellow with the Washington based group The Rules, which works on addressing global inequalities. Her poetry and prose have won in competitions organised by Singapore Poetry and Sampad Arts, UK.

I grew up in several towns in Bihar, and then spent the last seven years of my schooling in Ranchi, Jharkhand. In the sixth grade, I learned that when you go to college, there is a course where studying meant reading novels. Since then, I was essentially passing the time till I could enrol for English literature as an undergrad. I have been very lucky with my teachers and it was because of one of them that I first got involved in street theatre and have stayed with it since then in the form of Aatish, a street theatre group I co-founded.

Something we have our hearts set on and have started in a small way in Aatish is to, through theatre, facilitate conversations between youth and their families. Several young people are trying to bring about social justice through their work. Yet for so many of them, like Naguib Mahfouz says, home is where all their attempts to escape cease. We see in families the greatest support system that can, and often does, enable individuals to better the world they live in. But for this to happen we first need to have conversations around individual rights and choices vis-a-vis the fears, threats and risks that make families curtail those rights.

It has been challenging to run a group fluid in its membership, and to find ways to make arts sustainable without receiving institutionalised funding. We do not have a fixed rehearsal space in the city and people try to balance their commitment to the group along with other jobs. But the fact that we are soon going to be into our sixth year also lets us know that the lack of funds, institution or structure doesn’t stop you from doing what you want to.

Achievement denotes a certain finality, a task that has been”successfully completed”, and I am still in the process of learning and doing so many things. But what makes me the most satisfied is when I am in a play or talk or write about the truths of my own life as a woman. Adrienne Rich has referred to this: “When a woman tells the truth, she is creating the possibility for more truth around her.” And I have seen that happen. If one woman speaks up, others in the room come forward with their own stories. That changes everything.

Reading many, many more books.

There are many activists and artists who inspire me. But if you also have motivation, your inspired self doesn’t feel disappointed. I count my blessings when I think of the motivation I get from people who watch our plays or encourage what I write. Neither my in-laws nor my parents ask me to give up what I do and take up something more conventional. You don’t part with something you believe in because of what people say but it does make a positive difference when they support you.

I can’t predict tomorrow but I hope it pleasantly surprises me. I keep getting this feeling that I haven’t learnt some of my most important life lessons, so I want to go ahead and meet them before they catch me unawares and I get a rude shock!