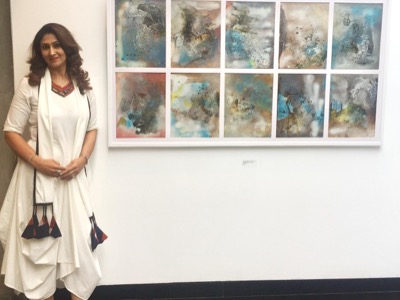 I am a contemporary artist, a Delhi University Graduate and a qualified Commercial Artist, underwent advance training in Creative Arts. Additionally, I hold a Bachelor of Education degree too.

I was invited to exhibit my paintings at the Rashtrapati Bhavan (House of the President of India) with other eminent artists. Dr. Abdul Kalam who inaugurated the exhibition, along with The Prime Minister of India and other dignitaries, highly praised my works. One of the works adorns the walls of Rashtrapati Bhavan and another painting ‘Leadership’ is in a collection of The Prime Minister of India’s Office, New Delhi.

Indian Council for Cultural Relations sponsored me and my works, held my solo shows in New Delhi, Berlin and London. Some of those works are now a part of the permanent collection of the Nehru Centre, London and The Indian Embassy, Berlin. My painting titled ‘Women through the Ages’ has been selected and showcased in a book by ICCR and is a part of an Exhibition travelling around the world.

I performed a Jugalbandi with famous flautist Shri Pandit Hari Prasad Chaurasia in front of an August gathering by painting live while he played his flute and was felicitated with ‘Sanatan Kalakriti Puraskar’ by Sanatan Sangeet Sanskriti for my contribution in the field of art.

I made 21 live paintings of the destitute, abandoned women. I interacted with them in Sudinalay, the destitute women’s home. These paintings are printed in a coffee table book “IMLI” and were also displayed by the UN office.

I was invited to present a talk on importance of Art Education and was awarded by All Ladies League, Women Economic Forum- ‘Iconic Leader in Art, Design & Entrepreneurship’

I have been interviewed by BBC London and featured in many other electronic media. Constant and encouraging reviews have found place in the columns of National and International Dailies too.

I went to Pulwama, Kashmir as a charity venture with the NGO Zabarwan Foundation and conducted art workshop for students there under Sensitization program. I have conducted several workshops, participated in camps, held several Solo Exhibitions and participated in various Group Shows world over.

Recently I have been appointed as an ambassador for a fitness magazine – FITMAG.

Prominent Private Art Collectors, Senior Officials, Art Lovers, the Rich and Famous have my works in their private and official collection. Presently, I head the Department of Fine Arts at the prestigious Sanskriti School in New Delhi. I live and work in New Delhi, India.

Through my art endeavour I wish to take up projects pertaining to women issues. And as a fitness enthusiast I wish to inspire women around the world to get motivated and get fit. Off late what impress me are public art and instillation projects which I wish to undertake in the near future.

Being a woman she has to balance her work, house, and relationship. She has to grow in her profession playing all other roles efficiently. For me too this has been challenging. Another challenge has been acceptance as a woman artist in the male dominated society. Freedom of expression and time constraint usually suppress a woman’s capability. But I believe all this had made me emerge out even stronger.

I would still be in a creative field which allows me to express myself in one form or the other. I would be a dancer, singer, actor, designer or a writer.

In the future I see myself doing purposeful art, educating towards importance of art. I also see myself motivating women through my pursuit of fitness and art endeavours.