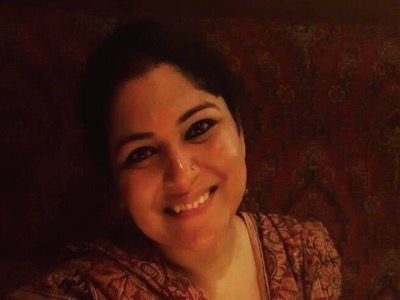 Saumya Baijal, is a writer in both English and Hindi. Her stories, poems and articles have been published on Jankipul.com, India Cultural Forum, The Silhouette Magazine, Feminism in India, Drunk Monkeys, Writer’s Asylum, among several others. Her writings reflect her personal & political thought processes, and question existing ideas of set definitions. She trains in Kathak, co-runs her street theatre group, Aatish, and is an Advertising Professional with over 10 years of experience working across the largest worldwide advertising networks. She has completed the Film Appreciation Course at the Film & Television Institute of India, enjoys understanding & reflecting on popular cinema. She has been a guest lecturer at Lady Irwin College and has been invited by other reputed Universities for talks & lectures around Gender. An alumni of Miranda House & the Indian Institute of Mass Communications, she has been involved with the Habitat Film Club & the Indian Languages Festival- Samanvay, enjoys reading, lecturing, decoding fashion and developing her personal style & signature on everything she attempts. Mortified of maths, in-love with Calvin & Hobbes, she is a dog lover, and a film snob! You can find her in closeted in her home, watching Guru Dutt’s films, again and again and again, and, again.

I could be a jack of all trades, or someone of varied interests, depending on how kind you want to be to me! I am essentially someone who loves to express, and the various things I do, are reflections of that desire. I am a writer, poetess, advertising professional with over 10 years of experience, cinema reader, theatre artist, and a student of dance. But in all of these varied forms, I find, my personal and political beliefs reflect strongly. As a feminist, gender debates, sensibilities & sensitivities, find their way into my expressions & conversations. I like to believe I am empathetic. Because without empathy, you can’t express or touch anyone’s mind or heart.

I come from a family of hard-working, honest, simple, warm people, committed to giving me a life better than they led. I grew up in Lucknow, surrounded by a culture of reading, with my parents being a great mix of modernity & traditions helping me build my own thought process and personality. This unsuspecting combination also helped develop a sense of personal choice in me, that over time I have learnt to exercise, over every small and large aspect of life. My father, an acclaimed doctor, has been a major influence. I have seen him be much more of a feminist than my mother, exemplifying equality, encouraging dialogue, welcoming debates and respecting points of view. All of which have been instrumental in my personal development as a free thinking, independent, vocal, feminist woman. My mother is the only reason why I am able to express myself in both English & Hindi, and explore the magic of both the languages.

My poems in both English & Hindi, have found their way into India Cultural Forum, Bhashabandhan Literary Review, Jankipul.com, The Lallantop amongst others. It is a great feeling to have your work appreciated and published by respected writers & publishers. My articles on cinema and gender, were given space on Drunk Monkeys & Feminism in India amongst others, and flash fiction has found readers of Paperless Postcards. All of these are collated on my blog.

I was honoured to have been invited by Lady Irwin College & Jamia Millia Islamia’s Department of History, to talk to them about Gender & Advertising and at the Central Institute of Education, University of Delhi, to speak about Cinema as a pedagogic tool, where I gave a special emphasis to gender. I am keen on taking these talks and lectures to more and more institutions, in the hope of starting conversations around gender as early as possible. I am writing more, fiction & non-fiction, poetry, prose & articles- questioning, arguing & seeking answers.

I also discovered that I enjoyed telling stories, and performing my own work. An opportunity at a friend’s open artist event helped me discover its potential and sheer joy, that I wish to now make a detailed performance of it very soon. Aatish, my street theatre group that I co-run with fellow feminists and dear friends, also took its first ever inter-city tour, which was a matter of immense pride for all of us. We are also taking many of our personal & political plays to various parts of the city and country, in our bid to initiate conversations & instigate thoughts. My training in Kathak continues from my Guruji, Jayashree Acharya, helping me push my own boundaries everyday.

I don’t think I am successful yet. There is a long winding road ahead that needs to be walked to get to that. However, whatever I have been graced with came with a fair bit of paralysing self-doubt. Also, art in our country, is still considered a secondary career option, relegated to the status of a hobby, because of its nature of lacking sustained income. And the cultural assumption, that as an artist, you chose a life of strained economic comforts. So, because of that uncertainty, I was dissuaded for a long time, from exploring this full-time. Fear of an uncertain world, can stall ambition and desire. It took me a while to realise that, you will just not know what you can do, unless you try. And if it terrifies and excites you, in equal measure, it really is worth a shot.

Also, in a world that is steadily becoming self-absorbed, fickle, violent & virtual, staying in touch with reality is critical. And in the space where there is a new artist every day, sometimes when mediocrity thrives, staying patient- waiting to be discovered, is just not easy. As far as performances are concerned, the sheer lack of spaces for performances big and small, and the apathy of people for the performing arts, limits our ability to create more, experiment more and present more.

There are several moments in the journey that have been incredibly special. But one of them would definitely be, the first time my Hindi poems got published. I would often write on my blog that was read by a handful of friends who were too polite to refuse. But stepping out of that comfortable space to opening oneself for critique (and appreciation), was a great feeling. Another, was performing pieces of Kathak, in the presence of the great Pandit Birju Maharaj ji, a dream I had seen as a child, but forced myself to forget, since it never seemed possible. It was converted into reality by my guruji, who I am blessed to be learning from since the past 4 years.

And another, would have to be a recent feeling of seeing my name on a name plank at a podium, as a lecture speaker with a bottle of water and a glass next to it, waiting.

It has to be a whole host of people. People I have admired for their grit, determination, love, empathy, endurance, minds, grace! Ranging from sportswomen like Serena Williams, to closest family and friends, I try to find something in everyone- something I can try and imbibe, something I can learn from.

I’d love it to have more theatre, much more writing, and many more deep, insightful conversations. And become a voice worth listening to especially in the feminist conversation. I hope I can make these things happen!