Inspirational Woman: Harshali Singh | Author of A Window to Her Dreams 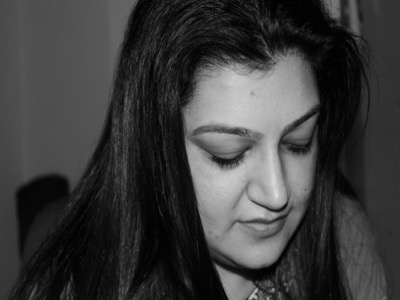 Harshali Singh is a New Delhi based Member Judge at the Consumer Forum, an avid reader and a passionate Painter.

She is an academician with a decade of experience of working with preprimary age group in different capacities ranging from Operations Head to the Curriculum and academic head. She, as a teacher trainer conducts workshops to enhance proficiency in advanced teaching methodologies. She is a trained Occupational Therapist from the Institute of The Physically Handicapped and also holds a Bachelor’s degree in Education and a L.L.B degree. While handling these demanding jobs she managed to take out time for her passion- oil painting and has also held an exhibition of her exclusive, vibrant paintings at the India Habitat Centre in 2014. Her debut novel A Window to Her Dreams is available in bookstores across the country and on across the world on Amazon. When not busy with the various roles she has undertaken, she is usually found with her books and her family, which include two teenage children, a mongrel named Bruce and a very patient other half.

A woman who assays many roles, that of a mother, a wife, a member Judge in the consumer Forum, a painter and above all, an observer is how I would describe myself. These roles define me and simultaneously inspire me.

My primary schooling was from a convent in Delhi, teaching me to set my moral compass north, always. As a senior, DPS R. K. Puram helped me to always believe in myself. Both were essential lessons in my view that shaped me to be the woman I am today. Occupational Therapy from the Institute for the Physically Handicapped added empathy, humility and ability to see both sides of life. An early marriage and babies made sure I detoured into the field of Education. After more than a decade of understanding the modalities of the pre- primary level learning and a Bed and LLB degree later, I joined the Consumer Forum as a Member Judge. In this meandering route to my current point in life I was accompanied by my love for painting and writing.

How did you get into writing? What was your journey like?

I was always writing but they were always stories that remained incomplete because the creative burst that had set me to put pen on paper was over. So even though the story was in my head I fought against time and circumstances before giving up in frustration. There were slips of paper that I scribbled on and saved as story ideas for when I would seriously start writing. That day just kept getting postponed.

In 2014 I attended a workshop on writing that helped me to recognise the golden rule of writing. Discipline. I began my story with a new spark armed with some technical knowledge on how to go about finishing my story. It took me around a year to flesh out the manuscript and another 11 months to find a publisher and bring it to print. My debut book has been released on 4th of December 2016. The journey I began alone has become a Karvan with so much happiness, positivity and encouragement. I feel blessed.

How did the story of ‘A Window To Her Dreams’ come to you?

The story was always simmering within me, it added to itself with the years that I added under my belt. It became layered with the number of people I met. The story flowed out without needing me to pull at it. I would say that it was the experiences that I had observed and absorbed that became the foundation of this book.

What message do you wish to impart through ‘A Window To Her Dreams’?

It is a story of a rising, an empowerment, a realization that we have the ability to find happiness within but sometimes not the strength to do so singe handedly. In my experience, we are not meant to live in isolation but as a clan, a group. We need our families and friends and partners to support us in time of need as we have to become theirs when they need us.

I wanted to bring to the forefront the realization that an event in a person’s life can be life altering as the horror that Aruna went through. The said event may change the course of our lives so irrevocably that it would be impossible to come back from it. In such a scenario the change can be so intrinsic that it will eventually become part of our behavior, our psych. Dealing with the ramifications of circumstances that our out of our control, choices and regrets that chase us through our lives are other touch points that I wanted to focus on. The cornerstone of what I wanted to say through the book was that ‘Sometimes love is enough’. Familial love that is expressed between siblings, between parents, friends and of course romantic love. I have always believed that if one is loved right they can become ten times the person they were meant to be, as does Aruna eventually with self- realization and the support of her loved ones.

Tell us more about Aruna.

Aruna, is the eldest daughter of the Sharma family. She has come out of a violent first marriage only to marry again albeit for reasons that are her own. She marries a man who had soft feelings for her in college, for his average safety for she craves the mundane after the harrowing adventure she has had.

She is not all pure and not all victim but has shades of grey just like all of us. She is cunning and fragile, innocent and shrewd, both black and white. What she is however, is a prisoner to her past experiences that have molded her into a contorted identity of herself. Her fight to let the past go, freeing herself from its confining clutches to find a better future for herself is the crux of the story.

Apart from being an author, you are also a Consumer Court Member Judge and an academician/educationist. What has been the most challenging role among these?

These are the capes that I wear with pride so they are not difficult to wear and I don these roles by choice and with gratitude.

Do you think it is any easier for women, particularly divorcees or widows, as more and more voices are being heard in favour of women empowerment and gender equality?

The issues of female enablement and equality are being articulated now where once these topics were not given prominence or the space they deserved. I am glad for this movement and hopeful for a tomorrow where there will be ease of thought and broadening of mind. It is getting the emphasis it deserves however slowly. But I believe as more voices join in favor of these issues the change is inevitably going to take place.

Success is a relative term, I believe I am successful for I have a family who loves me, children who are nice people in their own right. I have friends who love, respect and appreciate me. A full and happy life and though there are dreams I want to fulfill there is no urge in me to fulfill them at the cost of anyone’s pain.

The challenge I face is, time, to achieve my dreams. My plate is full and brimming so to add anything I am sometimes hard-pressed to find time. Sometimes I wish there were more than 24 hours in a day.

The ability to say ‘plot twist’ in difficult times and then reroute to Plan B.

I take inspiration where I can get it, from the people that I meet to music to behavior I observe. Why limit yourself I say.

I would like to bring forth a platform of workshops and seminars for an aspiring writer for free. I would like to create an environment that gives them the technical knowhow of how to begin their journey into these uncharted waters. A project that dedicates itself to improving and hand holding writers if they need help. A place of inspiration and encouragement.

I hope it holds health and happiness, the next book in the series being launched in the coming year. A new skill learnt.

Blurb of ‘A Window to Her Dreams’:

Aruna, a young divorcee, marries Bhuvan, an averagely successful young man who had a crush on Aruna, back in college. Both make promises of ever after with preconceived expectations. Hers, freedom from a judgemental society and validation of herself and his, unconditional love and partnership and the coming true of his dreams of marrying the ‘One’.

They are equally shattered to learn that despite their best intentions life does sometimes play the villain.

Aruna’s learned conditioning, developed as a result of the oppressive years spent with her abusive and often violent first husband Rafi constantly coming in the way of their married normalcy. Bhuvan valiantly trying to ignore the signs of her distress rather than confront them.

Their good intentions are tried at every step.

When it looks like the wheel of happiness is turning in their favour, situations arise to again plunge them headlong into turbulent waters continuing to test their determination to hold on to the dream of a better tomorrow. Aruna’s distrust, Bhuvan’s silences and Rafi’s resurrection in their life leads to create a downward spiral that shakes Aruna to the core. As she stands on the precipice of a second failed marriage she recalls her hopes and expectations and how she herself has become the hurdle in the path leading to the life of her dreams.

Will this serves as a trigger for Aruna to take the control back, the control she had willingly surrendered the first time? Or is she going to be held back by her own apprehensions choosing to stay the victim?