I’d read about Nico Bombay in Mumbai Boss and the mere mention of Vitello Tonato had me salivating. (Veal in a tuna sauce – and one of my favourite Italian staples). So last Saturday, Mr Jules and I took ourselves off to Kala Ghoda where Nico’s is located, for a bit of culture and nice food.
In the morning we checked out a couple of art galleries.  The Jehangir was full of the usual rubbish so we went on to visit the newly opened Delhi Art Gallery (just across from the bright blue synagogue) – which is currently showing “Mumbai Modern: Progressive Artists Group 1947 to 2013″. Of course, the art was on another level altogether when compared to what was showing at the Jehangir but not really to our taste.  Too much angst and naked women. 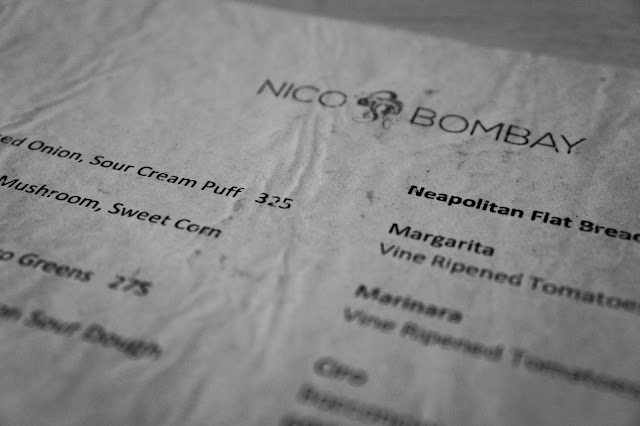 There was nothing for it after that – we’d have to have lunch (that Vitello Tonato was beckoning!)  We turned left into Apollo street and immediately saw the sign to Nico’s and an arched window with voile curtains gracefully draped within.  Looked promising so far.
As usual, we were the first in (at this point you also never know whether you will be the only customers during the whole of lunch service) and had the choice of seating – any table out of their 11 or so.  As we sat down on the suede director style seats I glanced around at the interior.  Very elegant yet contemporary with its huge bespoke glass chandeliers, wooden panelling and Victorian lamps. We immediately felt at home.
In the reviews, some people have complained about the foreign bottled water at Nico’s but the cold, sparkling Veen water from Finland was very welcome after walking for only a few minutes in the searing heat.  I say, if you want Bisleri, go to MacDonalds – plenty of it there!
It didn’t take long for us to make our selections from the mostly Italian-French menu – the starters didn’t yield much in the way of choice for Mr Jules so he went for the ‘pulled goat meat, red onions and micro greens’.  I of course went for the ‘veal tenderloin, tuna tonato’.  If I hadn’t gone for that, I may have chosen the Kadaifi wrapped prawns, citrus mousseline’.  For the main course – Mr Jules opted for the ‘roasted confit duck leg, pea puree’ and I went for the ‘oven roasted pumpkin ravioli, amaretti crumbs’.  We requested bread but were told there wasn’t any (bizarre considering that there were side plates were on the table!).
There is one thing that no western-style restaurant seems to be able to get right – and that is bringing out people’s food all at the same time.  Mr Jules’s goat thingy arrived first and then my veal a few minutes later. As his goat dish was warm, he would have to go ahead and start without me.  They also brought out our requested side dish of a quail egg salad (actually chicken’s egg as they had no quail eggs) with the starters.  Oh, and we received four slices of bread!
The pulled goat meat was presented in small pitta type pockets on a slate platter.  Yes – slate has arrived in Mumbai – whatever happened to the good old plate?  My veal also arrived on a slate platter – chunky tender pieces of soft and springy veal topped with what looked like tuna straight from the can.  The oil had not been drained off and was dripping off the edges (unless it was the dressing and was supposed to be like that?).  And disappointingly it was not the tuna tonato as I was expecting – tonato has a lot more ingredients in it resulting in a creamy mayonnaise like consistency. Having said that – the veal itself was delicious and being a tuna fan would definitely order this again.  Mr Jules enjoyed his goat thingy – I wouldn’t taste it as I have a phobia of (knowingly) eating goat.
I opted for a glass of white wine with my meal – a Grover Viognier – not too expensive at 275 Rs per glass (so I had two!).  And for the first time ever, Mr Jules managed to get a bottle of imported beer at the first request (restaurants tend to put imported beers on the menu but not actually have any in stock). Kronenbourg I think it was.
By now the restaurant was starting to fill up – with a table of glittery ladies-wot-lunch; a couple sharing one of Nico’s pizzas (sorry “Neopolitan Flat Breads’); two blokes prodding away on their respective I-phones and a jolly family of four.  A nice bubbling atmosphere was developing.
When Mr Jules’s duck was brought out, I immediately knew that I’d made a mistake ordering pasta.  It looked heavenly!  Absolutely beautifully presented, with a big ‘cheffy splodge’ of pea puree.  Bizarrely there were no potato side dishes on offer (perhaps this is a low-carb restaurant?) so he made do with the small potatoes in the egg salad. Mr Jules let me have a taste of his confit and I have to say – to die for!
Unfortunately I was to be massively disappointed with my pasta.  For what was presented to me – although very pretty – was in fact large tortellini and not ravioli.  Seriously, roasted pumpkin ravioli is a classic dish (best served with a sage butter) – so why the misdescription on the menu?  I am guessing that the pasta was freshly made – so it’s not like they would have ‘run out’ of ravioli.  The pumpkin mush inside the pasta – although it tasted OK was watery and bulky.  I wasn’t keen.  And I didn’t like the way it was served with slivers of raw tomato. Some work to be done there – I pulled the waitress over to complain about the misdescription but she just looked at me blankly.

I was hoping for better luck with the dessert.  The portions at Nico’s are just dainty enough that you can squeeze one in without feeling guilty.  I went for the chocolate fondant (chef’s worst nightmare!) and Mr Jules – the creme brûlée.
The creme brûlée strangely arrived in what looked like a lasagne dish big enough for six. But Mr Jules still managed to polish off the whole lot.  He said that the top was under-caramelised and the consistency a little runny to make it an excellent example.  My chocolate fondant was lovely – served in an expresso cup – the top was spongy and the inner shiny and silky.  It was served with an orange granita and a small dollop of chocolate mousse.  A very nice trilogy. 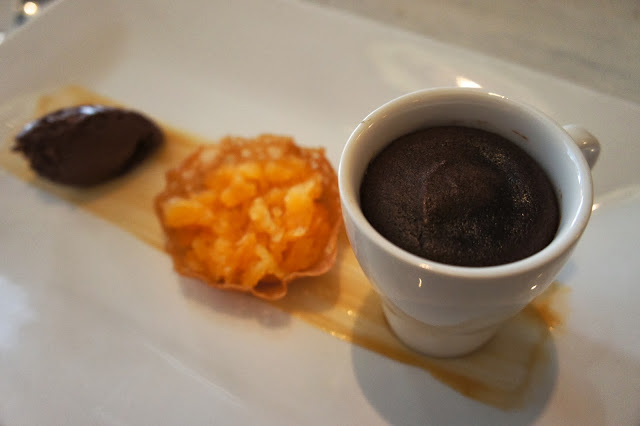 By the end of the meal – and despite a couple of culinary upsets – we were feeling warm and fuzzy inside (helped along by a couple of brandies).  We decided that we liked the restaurant very much and would definitely come back.  Nico Bombay hasn’t been open long so I am sure when we return – these little problems will have been ironed out.  The bill was just over 6,000 Rs (£60) but half of that was down to Maharashtra’s heavily taxed alcohol.
More pics: 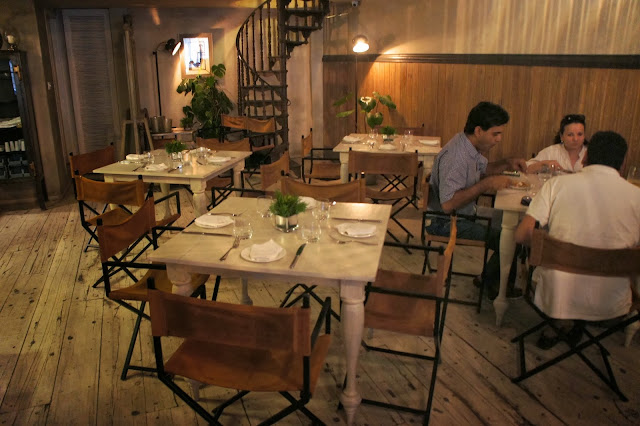 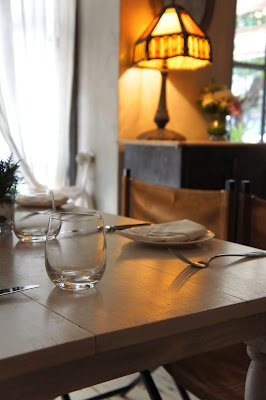