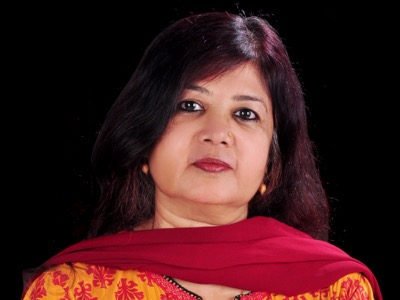 Deepti Menon has always loved the written word. She began to write at the age of ten, and was lucky enough to have travelled around the country, being an Army kid. Her experiences during those years helped hone her interest and her flair for writing. Her first book, ‘Arms and the Woman’, published in 2002, takes a light-hearted look at the life of an Army wife. 2013 and 2014 were lucky for her, as many of her short stories were chosen for anthologies – 21 Tales to Tell, Upper Cut, Chronicles of Urban Nomads, Mango Chutney, Crossed and Knotted, Rudraksha, Love – an Anthology, The Second Life, A Little Chorus of Love and Tonight’s the Night. The latest anthology, Mock, Stalk and Quarrel has a story by her as well.Deepti also writes humorous articles on various topics. Her serious pieces deal with social issues dealing with women and children.

She also has a book of poems, titled ‘Deeparadhana of Poems’, lovingly compiled by her mother, herself a talented writer. ‘Shadow in the Mirror’, a psychological thriller published by Readomania in 2016, is her latest offering.