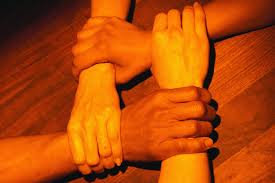 The caste of mankind perhaps? “But then you got married out of caste after all” , said my neighbour’s mom dismissively, shaking her head at my complete lack of knowledge or interest in the ceremonial rituals surrounding the festival of the month.

Indians, as you may all know, have a festival every month and now with the Global Indian having whole-heartedly embraced Thanksgiving and Halloween and other such assorted festivities, we may soon end up having two or more celebrations per month! Global, national and regional! In any case, I did a double-take and then a triple-take when she said that. Having been married for 25 years now, I am more used to having conversations on possible destination choices for friends’ children’s weddings rather than have anyone express an opinion around my own two decade old marriage. Added to that, a conversation around caste?

I got married into a household where caste again was treated with the derision it deserved and nobody in the family really gave a nickel for region, background and caste, or the rituals of comportment that created divisions within them.

Fortunately we were brought up in an environment where caste and creed were of no interest or consequence to anyone and the various ONGC colonies we resided in, during several sojourns in different parts of the country, resembled if anything, a miniature version of India Amalgamated. Life was egalitarian in its best form and the only thing that distinguished neighbours from UP and Gujarat from other neighbours from Punjab and Bengal were the different and delicious food items cooked in each household and the smells that emanated as a result. (Aah the smell of hing from a gujju household still makes my mouth water!)

We played and fought and made up and moved from city to city, meeting old friends again and making new ones within that enchanted circle, and the only label that defined each of us from whichever part of the country we may originally have been, was that of being part of the large ONGC family.

Subsequently I got married into a household where caste again was treated with the derision it deserved and nobody in the family really gave a nickel for region, background and caste, or the rituals of comportment that created divisions within them.

So when my brother-in-law was getting married, the priest started getting increasingly agitated since the family could not answer a single question around family deity, sub-caste, or gotta that he asked for, to conduct the marriage vows. Till finally in frustration, he asked irritatedly, “At least can you tell me the name of your forefathers and from whom you have descended?” To which my brother-in-law with a straight face responded,“We are descendants of Luv-Kush, sons of Sri Ram”. The priest was flummoxed and later had a major apoplectic fit in the privacy of his chambers, but the marriage ceremony concluded without a hitch!

No wonder I was taken aback at this reference to ’’out of caste’ my neighbor made. Having been brought up to believe that the only caste that exists is that of humankind, it seemed to me a peculiarly strange thing to say.Now I wish the parents of all those poor girls who go around ostracising their progeny because they have married out of the sub caste would get this too!

Or maybe they need to spend a few years in an army or ONGC colony to learn that “we are all involved in mankind” after all, and have descended from the same East African gene pool of homo sapiens.