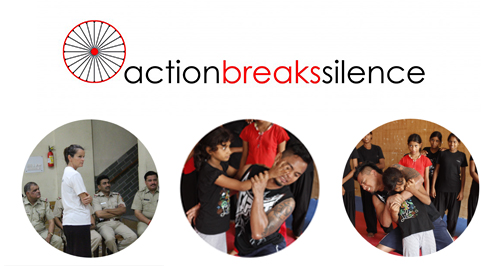 The world is shocked and horrified by the continuing news headlines in India detailing brutal rapes and sexual assaults against women of all ages.  Indeed, surveys have shown that:

Founded in 2013, Action Breaks Silence works primarily with underprivileged girls and women to teach them awareness and practical skills to reduce their chances of becoming a victim of crime.  Physical self-defence skills are taught in realistic scenarios, providing the women and girls with both useful techniques and a sense of empowerment.

To make Action Breaks Silence sustainable in the long term, Debi is adamant that she trains local Indian men and women to become qualified and experienced personal safely and self defence instructors. She is now training her first team of trainee instructors which consists of members of the Red Brigade – a vigilance group formed by founder Usha Vishwakarma and comprising survivors of sexual violence and rape.  The Red Brigade patrols the streets and markets of the state of Uttar Pradesh to identify men who are harassing women and, if necessary, intervene.

The other team members come from Kerala and belong to the CSK Kalari around the Marari Beach area. The women of the team will in the future be the lead instructors with the men assisting them. All local instructors are being paid as they work through their instructor training program. They not only need to learn and become competent of the physical tools, but also grasp a good understanding of both the emotional and psychological aspects of being attacked.

A team of men and women from Action Breaks Silence travelled to India in July 2013 conducting workshops over a month during which time they trained over 1,000 women and teenage girls.  This included teaching the members of The Red Brigade, Then in January 2014 Action Breaks Silence returned to Kerala and conducted workshops for over 3000 teenage girls from disadvantaged communities. In February and April 2014 they taught in Delhi, Mumbai and Pune, bringing the total number of women and teenage girls that they have taught over an eight-month period to nearly 7000.

Action Breaks Silence will return to Mumbai in July/August 2014 and besides teaching in disadvantage communities they will also be running workshops for women in the corporate and financial sectors. All monies raised from the private sector will be fed back into Action Breaks Silence to help finance more workshops for those that cannot afford them. Debi Steven gives her time and experience 100% free of charge and is truly committed to helping the women of India.

The personal safety and self-defence workshops are provided free of charge and are open to any women and teenage girls concerned about their welfare or safety.

Debi Steven has just been nominated as a ‘positive role model’ in the Nation Diversity Awards UK. Debi commented:

“Violence against women and girls in India – in all its shapes and forms – has become so acute and so prevalent that it has effectively become a gender or sexual-based war.  It wasn’t until the horrendous gang-rape and murder on a bus in Delhi in December last year, however, that the situation was brought to the world’s attention.

I couldn’t stand idly by. By offering my workshops, free, I hope to give life-changing options to underprivileged women and girls and provide help and hope wherever we are asked to teach.”

Action Breaks Silence is currently raising funds for its next trip to India. Please visit www.actionbreakssilence.org  to see the appeal video, including interviews of members of The Red Brigade.